We want a COVID-19 vaccine ASAP — that's a big ask. Here's how long vaccines normally take, and which diseases still don't have vaccines at all. 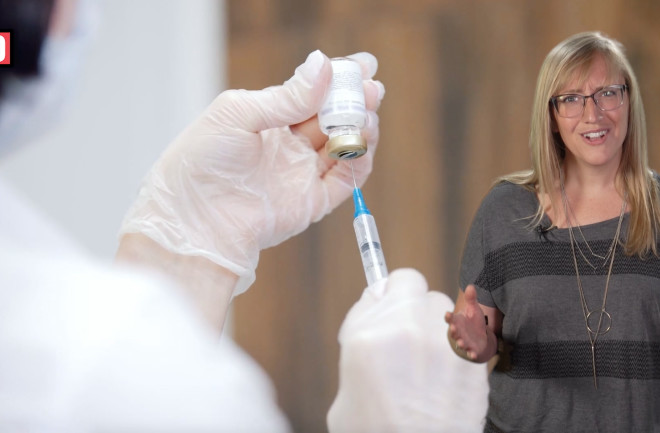 If scientists can develop a SARS-CoV-2 vaccine within a year and a half, it'll be a world record. The vaccine speed title is currently held by Maurice Hilleman, who turned his daughter’s throat swab into a licensed mumps vaccine within four years.

Other vaccines have not been so speedy. Measles was a nationally recognized disease in the U.S. for over 50 years before a vaccine was ready. And in 1984, officials declared that an HIV vaccine would be ready for testing in two years. More than 35 years later, we’re still waiting.

So, why are some vaccines so much harder to develop than others?

The answer often has to do with the viruses themselves, and how they behave in our bodies. Sometimes a vaccine just isn’t commercially viable. And in other instances, it’s the perceived threat of an illness that prolongs — or shortens — how long it takes to develop a way to stop it.

But before we dive into some of the challenges of vaccines, here’s a reminder on how they work.

Vaccines deliver a small amount of a modified virus to your immune system. This tiny introduction isn’t enough to make you sick; instead, it’s just enough that your body can learn to recognize the virus, and start to build up a tailored defense to it in the future. That way, if you’re actually exposed to the virus later, your immune system already knows what to do.

Some viruses, like HIV, are particularly good at tricking immune systems, though. One way they do this is by disguising themselves — they co-opt molecules that our immune system reads to determine whether an intruder is friend or foe, and put on a little “I’m friendly” disguise. This phony resemblance allows the virus to get a big head start on infecting cells before the immune system ever recognizes a threat.

This also means that any vaccine against HIV has to be super fine-tuned, since you don’t want the immune system to get confused and attack both itself as well as the HIV. It’s challenging. Other viruses aren’t quite so tricky.

In any case, the best defenses our body puts up against a virus — the ones the vaccine would like to trigger — also appear naturally after a patient’s immune system has been attacked.

These protective tools are called antibodies. Antibodies are proteins your body produces in response to an infection — and which can ward off a subsequent infection. If that sounds familiar, it’s because there’s been a lot of talk lately about coronavirus antibody tests, which are designed to look for signs that a person has begun fighting off SARS-CoV-2.

In coronavirus patients, it seems antibodies appear a few weeks after symptoms kick in. That might feel pretty slow. But in HIV, effective antibodies take way longer to appear. Like three to five years, or longer. And being that sick for that long is brutal, it can totally dismantle a person’s immune system, and ruin their ability to fight off other infections.

Another roadblock for vaccine research is funding. Federal or independent agencies typically allocate research funds for two- to five-year-long projects. So scientists might have to do small-scale studies that support their bigger ideas — but then it’s time to apply for a new grant. And a project can end if they don’t secure enough money the next time around.

Researchers can band together sometimes, and develop several ideas simultaneously to save precious time in case one aspect falls through. This kind of strategy is playing out now as researchers collaborate to develop a SARS-CoV-2 vaccine.

That’s because there can be a huge lag time between exposure and symptoms — children exposed to the virus often keep it in check and eventually develop mono when they’re way older. That means for the vaccine to be effective, you’d have to vaccinate preschoolers. But since EBV-infected children lack symptoms, that could make it hard to get FDA approval for that age range.

There’s a similar barrier for the HPV vaccine, for human papillomavirus, a super prevalent sexually transmitted infection. The vaccine is on the market, and is recommended for 11- and 12-year old girls, since you need it before becoming sexually active. But some parents don’t see why they should get it for their kid.

Scientists are still learning what COVID-19 infections look like and how to vaccinate against them. Finding this preventive treatment is essential, though — because even the most accurate antibody tests indicate that only a small percentage of the population has built immunity to the virus. That’s why there are over 100 potential COVID-19 vaccines in the works, with some researchers already testing theirs in humans.

Public health officials have said their goal is to have a vaccine in a year and a half. But some experts say that’s too optimistic. Regardless, some are hoping that all this new vaccine attention might do some good for vaccines that have been in the works for much longer.

Anna Funk is associate editor for Discover. Follow her on Twitter @DrAnnaFunk and check out our YouTube channel for more videos. This video is based on reporting by Leslie Nemo. Read her story here.