It blinds; it burns; it looks kind of pretty. An invasive, poisonous plant known as giant hogweed, or Heracleum mantegazzianum, is attacking western Ontario. The plant is a member of the carrot or parsley family, and as described in a brochure (pdf) from the Michigan Department of Agriculture, 20th century gardeners cultivated the giant for its impressive size and for its stem's purple coloring. But it soon broke out of gardens and arboretums, its seeds finding soil outside of captivity. Besides Canada, the plant has also appeared in the northern United States (both east and west) and as far south as Maryland. Ontario officials are concerned with the plants' continuing spread--it was most recently sighted in Renfrew County--and have urged anyone who spots it to contact them immediately. 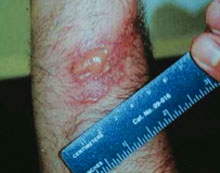 Giant Hogweed can grow to almost twenty feet tall and five feet wide, and each plant can produce tens of thousands of seeds. Sap on your skin can give you ugly blisters, the CBC reports, and sap in your eyes could cause blindness. Jeff Muzzi, manager of forestry services for Renfrew County, told the CBC that, despite its heft, the weed is a stealthy attacker.

"[Exposure] could be inadvertent," Muzzi said. "You might not even know it's here, [just] walk into it and happen to break a leaf. The next thing you know, you've got these nasty burns."