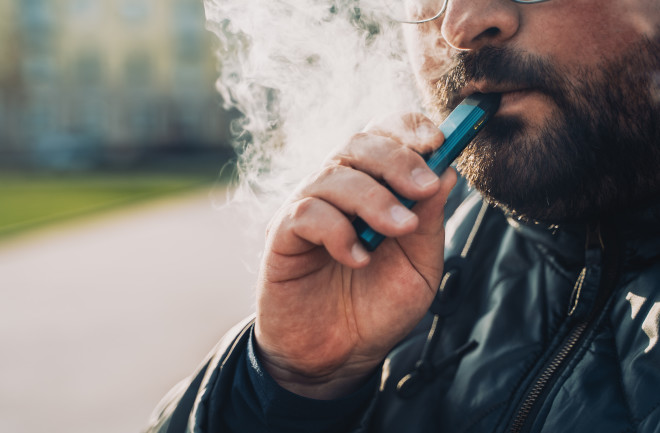 Electronic cigarette users might be at a higher risk of developing gum infections, according to new research out in the journal iScience.

Dental exams of nonsmokers, vaping device users and traditional smokers showed that the three groups had increasing levels of gum disease and infection. About 28 percent of nonsmokers showed signs of disease — while roughly 43 percent of e-cigarette users, and 73 percent of smokers, did. Spit samples confirmed higher levels of the culprit bacteria species in the mouths of e-cigarette and traditional smokers.

This is an early examination of mouth diseases in vaping device users, says co-author Deepak Saxena, a microbiology researcher at the New York University College of Dentistry. Beyond that, he says, the consequences of vaping might not be limited to just oral health: Chronic gum disease has also been associated with conditions like cardiovascular disease and diabetes, he says. “Our line of thinking is if we see something drastically changing in the mouth, it reflects the changes happening in our whole body.”

Researchers have known for a long time that puffing on tobacco products — full of nicotine and carcinogens — increases the odds of gum disease. But the condition is actually a microbiome issue, Saxena says. Repeatedly filling the mouth with smoke deprives normal, healthy bacteria of the oxygen they need, and gives problematic bacteria the low-oxygen conditions they need to thrive.

That’s what Saxena thinks vaping might be doing as well, based on these results. And as bacteria grow and help plaque accumulate on teeth, gums slowly retreat. Severe gum disease can even degrade the bone holding teeth in place.

Though vaping devices lack tar and other carcinogens that tobacco has, the electronic products contain flavorings and other additives. The devices are too new for scientists to have a solid idea of how they affect our dental health, and Saxena had no plans to add to the growing field of research. But when his son read a vaping ad while walking to elementary school and asked Saxena what the “cool” product was, he decided it was time to do the work.

If there are any consequences of vaping, Saxena says, maybe they start in the mouth, ”where the concentration of all these compounds will be the most potent.”

The research team ran their tests on 119 total e-cigarette users, smokers and nonsmokers. Though the last category was easy enough to find, the team couldn’t find 40 individuals who had only touched e-cigarettes and no tobacco products, so someone qualified as a vaping device user if they hadn’t smoked tobacco in the past year.

And the researchers’ results suggest to Saxena that vaping, like tobacco, provides the right conditions for harmful bacteria to flourish in the mouth and potentially elsewhere in the body, like the lungs.

The team also exposed skin cells to e-cigarette vapors and fresh air in the lab — and found that cells coping with vaping puffs were more likely to get infected by bacteria than those exposed to fresh air. If cells are more susceptible to infection, that might be another reason that harmful bacteria thrive in smokers’ mouths, but Saxena says the team isn’t sure yet why the cells are more vulnerable.

Saxena says his team is in the middle of a long-term study tracking the dental and oral health of e-cigarette users and nonsmokers right now. And, as vaping grows in popularity, researchers are just starting to catch up.