Under Controlled: Why the New GMO Panic Is More Sensational Than Sense

Scicurious is a PhD in Physiology, and is currently a postdoc in biomedical research. Follow on Twitter @Scicurious and read her blogs

and at Neurotic Physiology. 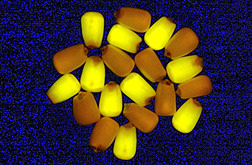 Addendum, September 27, 2012: As commentor Nico points out, the authors did indeed include control data lines in Figure 1, so the controls were presented. However, this does not change the problems with the paper, and the fact that we were never presented with hard numbers and standard errors for the controls or any of the experimental groups. Further, the authors of the paper noted that a percentage of their control rats died during the experiment and were taken out of the study. I have to say I find that rather odd, especially considering this is a study on mortality. The other issues with the paper still stand.