Ulcer-Causing Bacteria May Play a Role in Parkinson's

The bacterium that causes ulcers and some stomach cancers, Helicobacter pylori, could at least contribute to Parkinson's disease, according to a new study in mice presented at a microbiology conference yesterday. Mice infected with H. pylori have shown Parkinson's-like symptoms, building on earlier work that has suggested a link between the bacteria and Parkonson's disease. How the Heck: 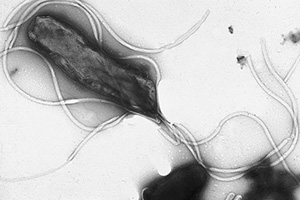