TV Can Slow Language Development, Even in the Background 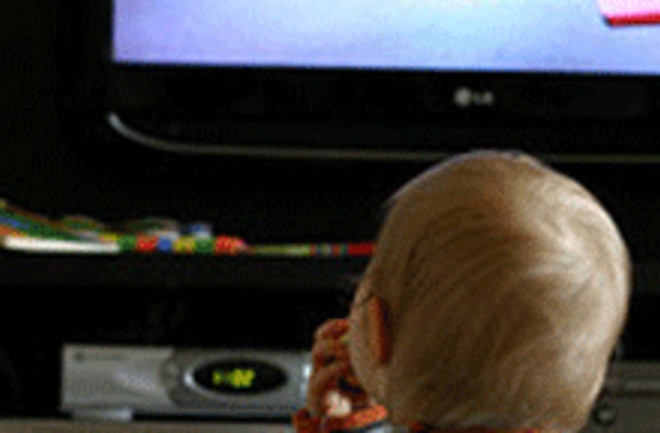 Parents might know that sitting children in front of the television for hours at a time isn’t the best way to encourage intellectual growth. But a new study published in the Archives of Pediatrics and Adolescent Medicine shows that simply having the TV on in the background can stifle interaction between parent and child, decreasing the number of words spoken and possibly slowing the development of a baby’s language skills. Scientists have long suspected that TV viewing can damage early development. In fact, the American Academy of Pediatrics recommends avoiding exposure to television before an infant is two years old, a period when important cognitive changes take place.

"We've known that television exposure during infancy is associated with language delays and attentional problems, but so far it has remained unclear why," said lead researcher Dimitri Christakis [LiveScience].

The researchers investigated by attaching sensors to both parents and their children between the ages of two months and four years. On sporadic days over a period of a month, the sensors recorded every word spoken or heard by the subjects. If a television was on, words emanating from the TV were counted, although researchers did not differentiate between whether subjects were actively watching the tube, or just had it on in the background as they went about other tasks. This technology allowed Christakis' team to quantify

exactly the degree to which TV-viewing can cripple parent-child communication: for every hour a television was turned on, babies heard 770 fewer words from an adult, the new study found. Conversational exchanges between baby and parent dropped 15%, as did the overall number of vocalizations made by children [Time]. That's important because previous research has shown that the more words children hear, the better they become at speaking. The exchange of fewer words, therefore, could potentially cause a deficit in language skills.

The effects of background TV could be far-reaching, since researchers say that nearly a third of households in the U.S. keep the boob tube turned on all the time.

"The newborn brain is very much a work in progress. All that cognitive stimulation is critical to the underlying architecture that's developing," [Christakis] says. "Every word that babies hear, and every time they hear it, is extremely important" [New Scientist].

Related Content: 80beats: Even Newborn Infants Can Feel the Beat 80beats: Smiles of Victory and Frowns of Defeat May Be Hard-Wired in Human Brains 80beats: Autism Linked to Genes That Govern Learning