Training the Immune System May Turn Off Peanut Allergies

For someone with severe peanut allergies, the tiniest trace of the nut makes their immune system go into overdrive, attacking what it perceives as an intruder so vehemently that the person can go into anaphylactic shock. Scientists may have found a way to calm that immune overreaction, a new study in rats shows, by tacking peanut proteins onto certain immune cells, effectively teaching the whole system that peanuts aren't a threat. How the Heck: 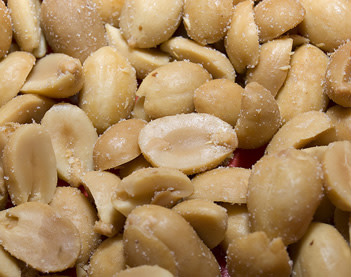 Not So Fast: The study was in rats, not humans. It will take a lot more testing, and a lot more time, to know whether this sort of treatment will allow people with severe peanut allergies can safely eat foods with trace amounts of peanuts, much less enjoy a PB&J. The Future Holds: The ultimate goal is, of course, to develop a treatment for people with severe allergies to peanuts or other food. The researchers also hope that tacking on proteins from multiple allergens---say peanuts, egg, and soy---could be used to treat multiple food allergies at once. Reference: Charles B. Smarr, Chia-Lin Hsu, Adam J. Byrne, Stephen D. Miller & Paul J. Bryce. "Antigen-Fixed Leukocytes Tolerize Th2 Responses in Mouse Models of Allergy." Journal of Immunology, published online October 5, 2011. DOI: 10.4049/​jimmunol.1100608