A new imaging technique may help doctors find the source of a heart attack before it happens. 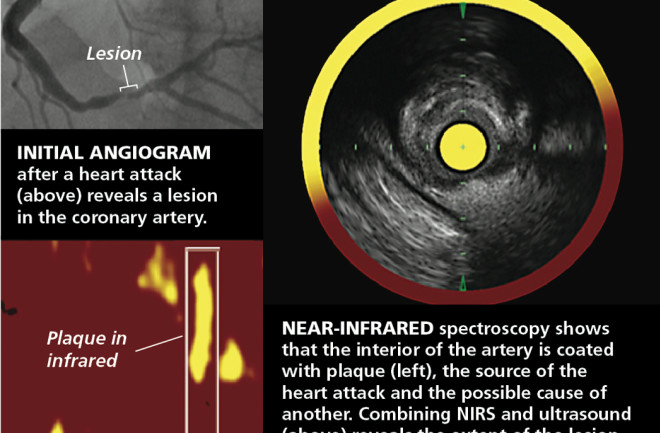 What if doctors could find the source of a heart attack before it happens? Up to 1 million heart attacks occur in the U.S. each year, and “not a single one can be predicted,” says cardiologist Ryan Madder at the Frederik Meijer Heart and Vascular Institute in Grand Rapids, Mich.

Most serious heart attacks begin when a plaque — a lipid core packed with cholesterol — literally blows its top inside an artery. The resulting clot blocks the flow of blood. In July, Madder’s research team reported that a novel imaging technique — near-infrared spectroscopy (NIRS), which uses infrared radiation to peer inside arteries — identified the culprit plaques in 19 of 20 heart attack patients.

Previously, such plaques came to light only during autopsies. But here, a catheter fitted with the NIRS system called out the culprit in real time, during treatment to put in a stent.

Now that he can detect them, Madder wants to search for potentially lethal plaques in people who have suffered one coronary and are at risk for another. Then he could intervene with stents or other measures before another attack.

[This article originally appeared in print as "Tracking Bad Plaque."]