Most of you have likely heard of the paper out in The Proceeding of the Royal Society, Can the common brain parasite, Toxoplasma gondii, influence human culture?. Here is the relevant section from the abstract:

Toxoplasma gondii, explains a statistically significant portion of the variance in aggregate neuroticism among populations, as well as in the 'neurotic' cultural dimensions of sex roles and uncertainty avoidance. Spurious or non-causal correlations between aggregate personality and aspects of climate and culture that influence T. gondii transmission could also drive these patterns. A link between culture and T. gondii hypothetically results from a behavioural manipulation that the parasite uses to increase its transmission to the next host in the life cycle: a cat. While latent toxoplasmosis is usually benign, the parasite's subtle effect on individual personality appears to alter the aggregate personality at the population level...if T. gondii does influence human culture, it is only one among many factors.

The headline worthy aspect of T. gondii is that cats are a reservoir of this pathogen. But please note that warmer climate, high population density, working with soil and spoiled meats are also positively correlated with T. gondii infection. One interesting point that the author notes that T. gondii's affect on the sexes is inverted except for the trait of guilt, so it might be a wash if sexes are not separated in the analysis. From the paper, "...infected women, intelligence, superego strength (rule-conscious, dutiful, conscientious, conforming, moralistic, staid and rule-bound) and affectothymia (warm, outgoing, attentive to others, kindly, easy-going, participating and likes people) are higher, while infected men have lower intelligence, superego strength and novelty-seeking (low novelty-seeking indicates rigid, loyal, stoic, slow-tempered and frugal personalities); both infected men and women have higher levels of guilt-proneness (they tend to be more apprehensive, self-doubting, worried, guilt prone, insecure, worrying and self-blaming." The author found a statistically significant correlation between neuroticism and T. gondii infection rates across nations. Variation in T. gondii infection explained about 1/3 of variation of neuroticism across countries. Other traits were so weak in their correlations (e.g., R^2 of 0.07, or 7% of the variation) that they did not attain statistical significance. But, when the samples excluded non-Western nations other traits did attain statistical significance. Hungary and China had higher neuroticism than expected from T. gondii infection rates, while Turkey had lower neuroticism. Similarly, Japan and South Korea were dramatically more differentiated in sex roles than their low T. gondii rates would have predicted, while Jamaicans seemed to exhibit lower uncertainty avoidance. When only Western nations were considered uncertainty avoidance and masculine sex roles were signficantly predicated by T. gondii infection rates, with the later yielding an R^2 of 0.27. The author offers in the discussion "if T. gondii does affect cultural dimension, then it does not drive differences seen among the major cultural groups (e.g. Western, African, Asian). Tests among Western nations were possible owing to adequate sample sizes." Germans and Scandinavians are genetically and culturally close populations, so, it stands to reason that the impact of T. gondii might be outsized in explaining the between group variance in this case (note that Germany is far denser than Norway, for example). In contrast, the genetic & cultural difference between China and Germany is great enough that T. gondii might not explain much of the difference or similarity between these two populations. Jerome Kagan's work suggests that East Asian infants are already a bit inhibited and shy in comparison to European infants, so the genetically coded differences between the populations might swamp out T. gondii's modulating effect (though variation in T. gondii within China might be significant and explain differences in personality and culture between Guanghzhou and Harbin, for example). And of course, the cultural matrix in which one develops might also buffer and alter the development of the combined genetic and parasitically shaped biases. That is, just as T. gondii's effect might be seen as being contextualized by a meta-populational norm of reaction (e.g., Europeans vs. East Asians), so the genetic and parastical parameters likely unfold differently in different cultural matrices. If you want to comment, read the full paper here (PDF) for free. Here is an informative table from the paper: "Age-adjusted prevalence, aggregate neuroticism (N), the cultural dimensions of uncertainty avoidance (U) and masculinity (M)among nations. Original references for most of the T. gondii data...." 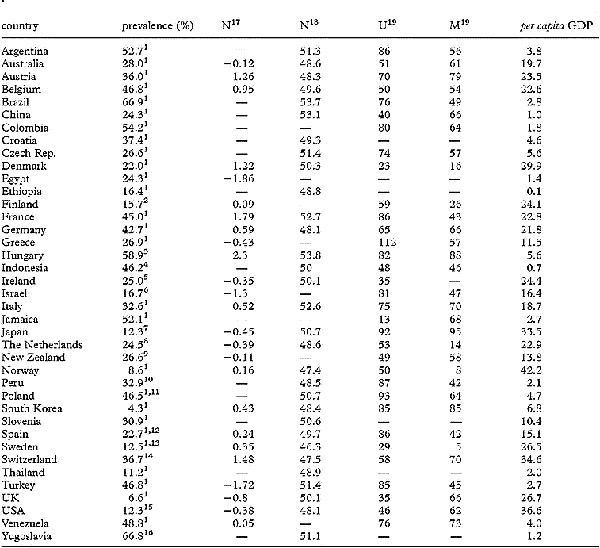