Toward a Cure for Ebola and Rabies

A new antiviral could tackle two of the world's most feared viral villains. 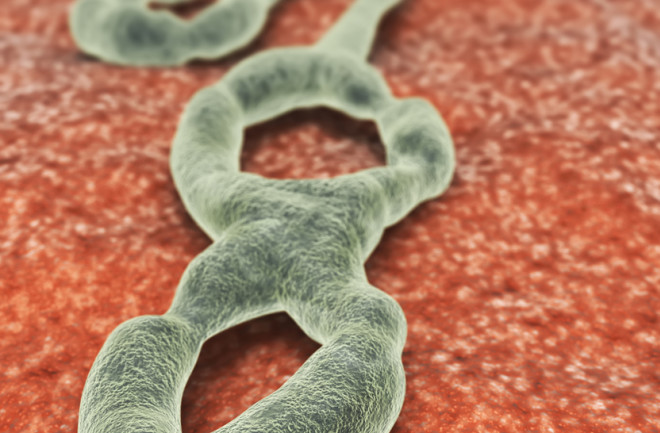 Illustration of the ebola virus. | Gl0ck/Shutterstock

Two of the world’s most feared viral villains may have met their match.

Rabies, with a nearly 100 percent mortality rate, and the gruesome hemorrhagic virus Ebola belong to a particularly nasty family — and neither disease has a cure.

In March, John Connor, a virologist at the Boston University School of Medicine, and his team identified a synthetic compound that appears to shut down replication in Ebola and other members of the nonsegmented, negative strand (NNS) RNA virus family. Based on a plant-based class of molecules known as indoline alkaloids, the compound inhibits an enzyme called polymerase, which enables a virus to make thousands of copies of itself and cause disease, explains Claire Marie Filone, the study’s lead author.

Unlike the existing rabies vaccine, which is administered shortly after a bite by a rabid animal and provokes an immune response in the host, potential antiviral treatments developed from the new compound would target NNS RNA viruses directly.

“Our hope is for a cure. This is a step on that path,” says Connor. “At the very least, now we’ve got new tools.”

[This article originally appeared in print as "Ebola and Rabies: Toward a Cure."]