Tobacco Plants Can "Grow" a Vaccine to Fight Lymphoma 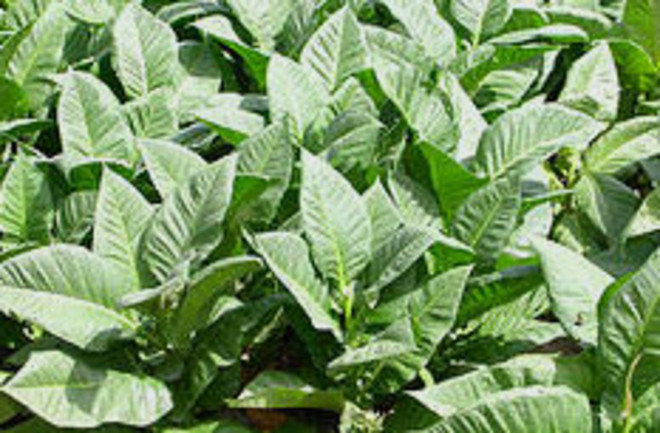 Researchers say they have turned a tobacco plant into a living factory that can produce individualized vaccines to fight a type of cancer known as follicular lymphoma. While similar vaccines have been grown inside animal cells, researchers say this new process is quicker and less expensive, and could carry less risk to the patient, as animal cells might hold unknown viruses

In the new technique, researchers took biopsies from each lymphoma patient and isolated the gene that produces tumor-fighting antibodies, which is slightly different in each person. In each case, they then used a genetically engineered tobacco virus to bring the gene into a tobacco plant, where the plant responded by turning out antibodies. One week later the tobacco leaves were picked and ground into pulp, and the antibodies were extracted.

These antibodies are put into a patient newly-diagnosed with the disease, to "prime" the body's immune system to attack any cell carrying them. If successful, this would mean the body would then recognise and destroy the lymphoma cells [BBC News].

The study, published in the Proceedings of the National Academy of Sciences [subscription required], suggests that patients who have just been diagnosed with lymphoma could try to fight off the disease without resorting to toxic chemotherapy.

"This would be a way to treat cancer without side effects," [lead researcher Ronald] Levy said in a statement. "The idea is to marshal the body's own immune system to fight cancer" [Reuters].

The study, in 16 newly diagnosed patients, was too small to determine if the vaccine helped, Levy said. It did show the approach is safe and generated the intended immune response [Bloomberg]. Researchers hope to follow up soon with a larger study that could examine the treatment's efficacy in fighting the spread of lymphoma.

More From Discover
The Sciences
5 Top Breakthrough Medical Technologies and How They Changed The World
Health
Autoimmune Diseases Are on the Rise, Along With More Promising Preventative Measures
Health
Omicron Variant: What We Know So Far
Health
Humans Have Altered Their Life Expectancy in Extraordinary Ways
Health
Medical Aid in Dying: A Comprehensive Breakdown
Mind
A Personal Glimpse at Living With Early-Onset Alzheimer’s Disease
Recommendations From Our Store
My Science ShopDiscover STEM Kits
My Science ShopDiscover 2022 Calendar
My Science ShopStrange Science
My Science ShopElements Flashcards
Shop Now
Stay Curious
Join
Our List