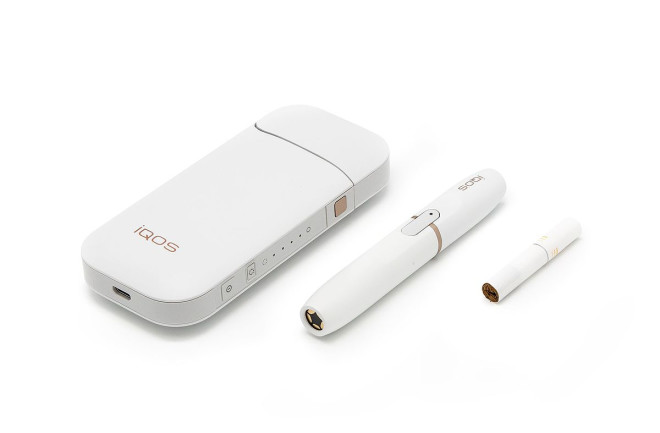 The IQOS smokeless tobacco product. (Credit: SimonDes/Philip Morris International) Smoking: It's bad for you. Take the smoke out of smoking, though, and you might be on to something. That, at least, is the thought process behind newly-emerging smokeless forms of nicotine, the most prominent right now being e-cigarettes. A vape pen just doesn't deliver the same sweet rush of nicotine and the satisfying "throat hit" smokers crave, though, leaving tobacco companies searching for a better option. Heat-not-burn tobacco products have stepped into that space, promising a nicotine-rich rush of vapor that's free of the carcinogens that traditional cigarettes deliver. It's already popular in Japan, and tobacco companies are seeking to gain approval for their products here in the U.S.

Philip Morris, which produces the Marlboro brand, has seen sales of its IQOS device in Japan far outpace its production capabilities in the past few years. The pen-sized device uses a small heating blade to warm a plug of tobacco to a over 600 degrees Fahrenheit, not hot enough to ignite it, but sufficient to produce a nicotine-laced vapor which the user can inhale. The product is a healthier alternative to their cigarettes, the company claims. A new study from public health researcher John Ayers in the journal PLOS ONE suggests that the market for heat-not-burn tobacco products could soon ignite in the U.S. and highlights the lack of research into the effects these products could have on our bodies. Just 26 studies reference heat-not-burn products, according to the press release. That's compared to the many thousands on tobacco, nicotine and cigarettes. Though the products are held to be less dangerous than cigarettes because they do not involve smoke, there's not a lot of research to back that up. The few studies of the device thus far agree, but with a caveat: Heating and inhaling tobacco in this manner still produces harmful chemicals. It might not harm you as much as a cigarette would, but it's still detrimental to your health. Philip Morris has been strongly critical of such research, going so far as to send letters to the heads of universities whose researchers published a study this year examining heat-not-burn products, reports the Washington Post. Those researchers refused to even talk to the paper.

Electronic devices that heat tobacco to produce vapor aren't a new idea, either. Similar products have been around since the 1980s, although consumers then weren't as excited, and the technology never took hold. Philip Morris developed a device called the Accord utilizing the same basic concept in the 90s, and rival RJ Reynolds attempted something similar with the Eclipse. Preliminary studies at the time found much the same thing as research today — it might be a bit better for you, but it's not safe. Philip Morris points to its own research into the matter — carried out at its glittering new facility in Switzerland — showing the relative merits of devices like the IQOS and highlighting the lowered levels of chemicals. The study that attracted their ire last year, from Swiss researchers, showed higher levels of most dangerous chemicals than the company reported in its own work, though. Controversy notwithstanding, the IQOS seems poised to appeal to a market of younger customers wary of cigarettes but open to alternative forms of nicotine consumption. A 2016 report by the Department of Health and Human Services found that vaping had surpassed cigarette use among younger users, and those totals will likely rise. Heat-not-burn products, with their slick packaging and nominally healthier technology, could find a solid foothold here as well. Ayers' report doesn't necessarily recommend banning or even heavily restricting the devices. It's instead a warning to researchers that the data is lagging behind the cultural zeitgeist. Tobacco companies have a well-established history of lying to consumers and promising healthier alternatives — for example, "light cigarettes" — and the same could happen here. With indications that these devices are still harmful, though not as much as cigarettes, consumers are at risk of being deceived by marketing campaigns that take advantage of a lack of context and murky research to push an unsafe product. There's also a debate to be had about whether promoting a product that's a little safer versus pursuing complete eradication is best. There's no definitive answer for that question when it comes to smoking yet, in part because we don't even have the data to begin looking at it clearly.