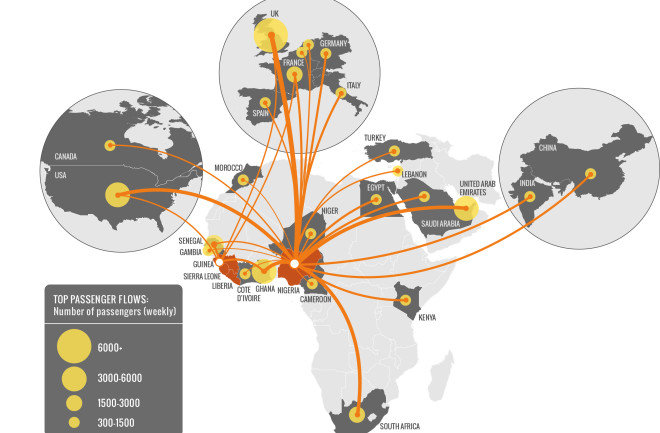 Air traffic connections from West African countries to the rest of the world. Guinea, Liberia, and Sierra Leone are not well connected outside the region; Nigeria, in contrast, is. (Credit: PLOS Currents Outbreaks)

The Ebola virus has consistently stayed several steps ahead of doctors, public officials and others trying to fight the epidemic. Throughout the first half of 2014, it spread quickly as international and even local leaders failed to recognize the severity of the situation. In recent weeks, with international response in high gear, the virus has thrown more curve balls.

The spread has significantly slowed in Liberia and beds for Ebola patients are empty even as the U.S. is building multiple treatment centers there. Meanwhile the epidemic has escalated greatly in Sierra Leone, which has a serious dearth of treatment centers. And in Mali, where an incursion was successfully contained in October, a rash of new cases has spread from an infected imam.

Predicting the trajectory of Ebola rather than playing catching-up could do much to help prevent and contain the disease. Some experts have called for prioritizing mobile treatment units that can be quickly relocated to the spots most needed. Figuring out where Ebola is likely to strike next or finding emerging hot spots early on would be key to the placement of these treatment centers.

But such modeling requires data, and lots of it.  And for stressed healthcare workers on the ground and government and non-profit agencies scrambling to combat a raging epidemic, collecting and disseminating data is often not a high priority.

The crux to combating Ebola is understanding how people move between different cities, villages and countries. Such data are already captured in a variety of metrics. On the macro level, records of border crossings and airline flights create clear pictures. On a more local level, trucking and bus routes and traffic flows help. But especially in rural areas like the forests of Guinea where the epidemic started, even more detailed information is needed.

Alessandro Vespignani is one researcher trying to gather that information. Vespignani seeks population data at the most granular level possible, trying to determine numbers of people and types of dwellings within five by five mile boxes, for example. He uses local census numbers plus data from the LandScan program out of Oak Ridge National Laboratory and Worldpop, a UK-based project to map populations in Africa, Asia and Latin America with a focus on development and health. He integrates that information with Ebola data provided by health agencies, and with data on the movement of people from airlines, borders, transportation records and other sources. In early September he published a high-profile projection of the potential international spread of Ebola, using these data sources.

Mobile phone records are another promising way to track the movements of people at a more localized level. Phone data stripped of users’ identities helped researchers understand past epidemics including the cholera outbreak following the 2010 Haiti earthquake.

Researchers involved in the Swedish non-profit organization Flowminder have been trying to use mobile phone records to shed light on Ebola’s spread. However they’ve been so far stymied by a lack of cooperation from phone companies and from government regulators in West Africa, who have not made the data available. To demonstrate the potential of its approach, Flowminder created a model showing people’s movements in Senegal and Ivory Coast using several-year-old data from Orange Telecom. Flowminder board member Andy Tatem, a Reader at the University of Southampton, says that negotiations are ongoing with government regulators and companies which could provide the mobile phone data, but it has been slow going.

“This kind of data can give you information about population level movements, how they change over time, how they change over space,” says Tatem, who is also director of Worldpop and an expert in modeling population movements related to malaria. (There is no talk of using phone data to track individual people infected by Ebola. That would be considered a major breach of privacy, and would also likely be impossible given the high number of cases.)

“It’s an area of the world where there are huge seasonal movements, mobility patterns changing month by month. People cross borders between countries, people are moving to the cities looking for alternative work.”

However even mobile phone data isn’t a perfect relay of what’s going on on the ground. A dense city could have numerous phone towers, allowing fairly precise modeling of human flows, even down to specific neighborhoods. But in rural areas, one tower might cover a radius of 50 miles or more, making it less useful in estimating movements between small villages.

And in the impoverished and often geographically isolated areas decimated by Ebola, many people don’t have mobile phones. As a whole, mobile phone usage in Africa is high and growing. But Guinea, Sierra Leone and Liberia have among the lowest mobile phone usage rates in Sub-Saharan Africa, with between 51 and 54 percent of households having phones, compared to 78 percent for Nigeria and 96 percent for Mauritania, according to a Gallup poll this year. In the U.S., nine in 10 adults have a mobile phone.

Using data for a dynamic understanding of the epidemic also naturally involves information compiled by health care workers on the ground, including counts of cases, deaths and people in isolation. Record-keeping during the epidemic has been notoriously flawed and incomplete, and getting records from far-flung clinics that may not have computers is a daunting undertaking.

“We are talking about very weak health care systems in the region that were right away overwhelmed by the situation,” says Vespignani. “In that case you cannot ask people who are really struggling to save lives, to get data.”

But Vespignani is hopeful that as the epidemic ebbs, as it has at least in Liberia, staff and officials will be able to focus more on compiling and providing data from Ebola treatment centers.

For instance, researchers could compare predicted caseloads with actual caseloads in specific areas where initiatives around safe burials, prevention, isolation or other best practices have been implemented. That could reveal whether such efforts have significantly reduced infections compared to what otherwise would have been expected. Another aspect not currently captured in models, he says, is “social behavior” like  community perception of the disease and rate of compliance with government and agency warnings.

And such data could be key to making sure the epidemic is really stamped out, and doesn’t resurface catching people unaware.

“When I hear people saying the epidemic is subsiding I always shiver,” he says. “We see improvement, there’s a slowing down and things are improving in certain places, but we need to have the last battle to really try to contain it. Any decrease of effort, any arrogance to say we are good, could really backfire and we could find ourselves with a disaster.”