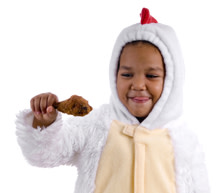 Some cells take the mantra “you are what you eat” quite literally.In a process known as autophagy, cells form internal sacs of digestive enzymes—like extra stomachs—and cannibalize parts of themselves.This usually occurs in times of starvation when a cell needs to recycle bits of itself or get rid of intracellular pathogens.But new research shows that cellular self-cannibalization can also play a role in fighting cancer.

Researchers at the University of Texas M.D. Anderson Cancer Center found that a protein, PEA-15, affects the rate at which ovarian cancer cells self-cannibalize through autophagy.PEA-15 induces cancer cells to form digestive sacs, known as lysosomes, and eat themselves from the inside.That’s not just Hannibal Lecter cannibalism—it’s like Lecter chewing on his own arm.

The researchers hope understanding how PEA-15 inhibits cancer growth will lead to better treatments for ovarian cancer, which affects more than 20,000 women in the U.S. per year and is notoriously difficult to diagnose.

Granted, autophagy isn’t the only way cells can commit suicide.Sometimes cells just blow themselves to bits in a process with an appropriately onomatopoeic name: apoptosis.