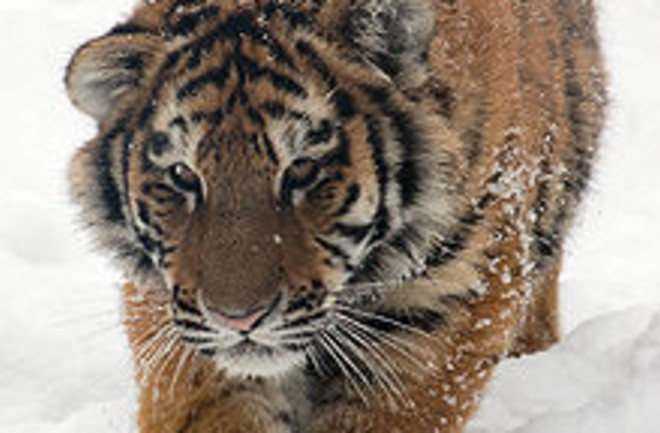 Credit: Derek Ramsey Getting a paper published with a newly sequenced genome is considered somewhat passé and so aughts at this point, but there are cases which are exceptions to this rule. Tigers are a charismatic and rare (<10,000 in the wild) super-predator, so when you see that they, along with a few other Panthera species, have been sequenced you take some note. The paper in question is open access, so you can read it yourself: The tiger genome and comparative analysis with lion and snow leopard genomes (not to spoil it, but there's a Venn diagram!). Before today only Felis silvetris catus had a reference sequence within the mammalian family Felidae. This fact should make you reconsider the idea that a new genome sequence is always boring and not noteworthy, as most lineages of mammals are represented by only one representative individual from one representative species. In ~5 years it is true that we'll be beyond this stage of data scarcity in the sense of phylogenetic coverage, but we're not there yet. The paper consists of the standard recipe of genome papers, N50 values and GO analysis and the like. It must be done, but at this stage of the game I pretty much skim over these sections. Also, in terms of the more straightforward results it isn't very surprising that Siberian tigers exhibit signatures of natural selection when it comes to loci which control strength and musculature. This is rather like discovering the fact that the alleles which result in blue eyes are found at a higher fraction in Norwegians than Greeks.

Citation: Cho et al. What's some more surprising is that that old chestnut about humans being rather genetically homogeneous on the grand scale of things may not be so true (at least for mammals of some physical size). The normal point of comparison is to other great apes, but you can see here that the Panthera lineages are quite homogeneous (not sure that the cat example is that informative, since the heterozygosity for the genome level may be due to sequencing of a breed cat, as opposed to a more normal feral cat). Using PSMC, which looks at heterozygosity within individuals, the authors inferred some bottlenecks in recent Pantherahistory. This is not so surprising, as big mammals presumably do not have large effective population sizes in the first place, and so might be unduly impacted by environmental shifts (inclusive of humans as 'environmental') and disease. There are also two other findings in the domain of genes which produce functions across mammalian lineages. First, a totally unsurprising one, some of the same genes which encode human pigmentation do so in tiger coat patterns. We knew this likelihood from mice, horse, and cats (at even zebrafish, so it spans vertebrates). Mammals have a finite number of genes which one can modify to produce variations in pigmentation, and the wheel keeps getting reinvented over and over (for example, it looks as if SLC45A2 is is implicated in whiteness in tigers, as it is in humans). But another finding is that

snow leopards may have similar high altitude adaptations as humans!

In hindsight, unsurprising, but I find that rather cool. Overall I'd say that the really novel insights will come about when we increase genome quality and sample size. That's so trivially true that I don't feel like writing it down, but at least we don't have to wait that long. The main concern with a species like the Siberian tiger is that they may go extinct very soon and very rapidly, even in the scale of genome technology time. This is sad, but true.