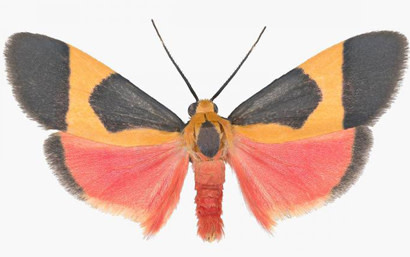 TIL that tiger moths have evolved a clever way to avoid being eaten by their biggest predators, bats. Storing up toxins (cardiac glycosides) from the plants they feed on as larvae make them "highly unpalatable" (read: disgusting). That's cool in and of itself, but these moths take it a step further. This study shows that the moths use special organs called "tymbals" to broadcast sounds. Tymbals are related to the sound organs of cicadas, but tiger moths use the sounds like other species use bright colors: to warn potential predators to "Stay away, I'm toxic!" Maybe next time, bat!Acoustic Aposematism and Evasive Action in Select Chemically Defended Arctiine (Lepidoptera: Erebidae) Species: Nonchalant or Not? "Tiger moths (Erebidae: Arctiinae) have experienced intense selective pressure from echolocating, insectivorous bats for over 65 million years. One outcome has been the evolution of acoustic signals that advertise the presence of toxins sequestered from the moths’ larval host plants, i.e. acoustic aposematism. Little is known about the effectiveness of tiger moth anti-bat sounds in their natural environments. We used multiple infrared cameras to reconstruct bat-moth interactions in three-dimensional (3-D) space to examine how functional sound-producing organs called tymbals affect predation of two chemically defended tiger moth species: Pygarctia roseicapitis (Arctiini) and Cisthene martini (Lithosiini). P. roseicapitis and C. martini with intact tymbals were 1.8 and 1.6 times less likely to be captured by bats relative to those rendered silent. 3-D flight path and acoustic analyses indicated that bats actively avoided capturing sound-producing moths. Clicking behavior differed between the two tiger moth species, with P. roseicapitis responding in an earlier phase of bat attack. Evasive flight behavior in response to bat attacks was markedly different between the two tiger moth species. P. roseicapitis frequently paired evasive dives with aposematic sound production. C. martini were considerably more nonchalant and employed evasion in fewer interactions. Our results show that acoustic aposematism is effective at deterring bat predation in a natural context and that this strategy is likely to be the ancestral function of tymbal organs within the Arctiinae." Related content: Hawkmoths jam bat radar with ultrasonic blasts from their genitals.Retention of memory through metamorphosis: can a moth remember what it learned as a caterpillar?How to use bug sex to forecast the weather.