This HIV Test Fits on a USB Drive 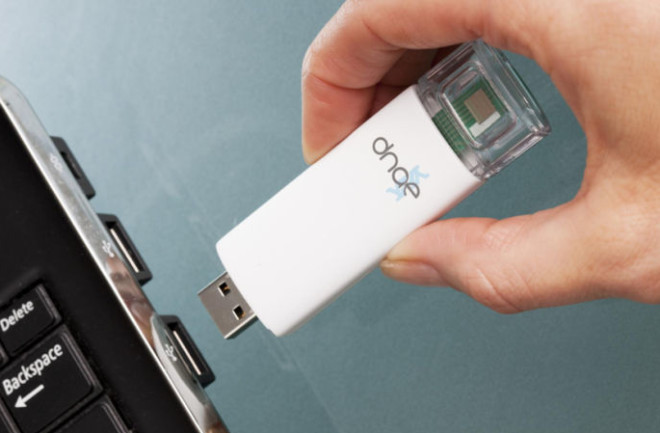 (Credit: Imperial College London/DNA Electronics) A new HIV test is as simple as plugging a USB drive into a computer. Scientists from London's Imperial College and a private genomics analysis company created a device that uses pH to test for the HIV-1 virus and communicates the results to a USB stick. The test requires only a drop of blood and the researchers say that it is simple and cost-effective to manufacture, offering a low-cost option for the millions of HIV-positive individuals who must monitor the effectiveness of their treatment regimes.

Test On A Stick

The test uses a sensor to measure changes in acidity levels and a chip to communicate that information to the USB. When the sensor heats up blood containing the HIV virus hydrogen ions are produced, altering the acidity of the sample in a specific way. The sensor measures this change and passes it along. The whole process takes less than half an hour, and yields a success rate of 95 percent in the lab. The success rate when the test was actually applied on the stick was 88 percent. The device fits neatly atop the USB stick, requires no external power sources, and is easily disposable. The researchers published their results Thursday in Scientific Reports. Antiretroviral drug therapies are largely successful in controlling HIV infections, but sometimes the virus will mutate, rendering the drugs ineffective. When this happens, patients and doctors need to know as soon as possible, both to preserve the patients' health and prevent the spread of drug-resistant strains of the disease. For this reason, regular tests are recommended for patients with HIV.

Current HIV tests are either not reliable enough or difficult to perform, especially for patients in developing countries. Home test kits can produce results in about 20 minutes, but some tests have an error rate of almost 10 percent, requiring follow-up tests. Lab tests are more accurate, but are expensive to perform, require access to healthcare and take several days to return results. For those living in rural villages in poor areas, getting these kinds of tests is difficult. The researchers say that more work needs to be done to prepare their device for field use, including making the device more accurate, but that it has the potential to be used to detect multiple viruses in addition to HIV.