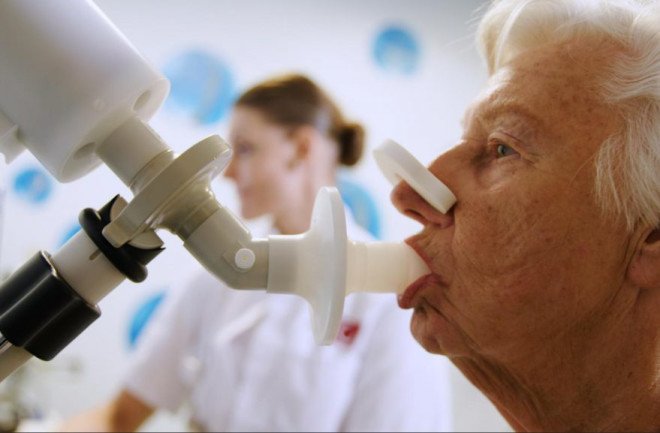 The newest cancer sniffer might not be as cute as a sharp-nosed canine, but it could give doctors a new way to determine the best treatment for patients using just the melange of compounds in their breath.

The eNose can detect with 85 percent accuracy if a person will respond to immunotherapy, say researchers in a paper published today in Annals of Oncology. That could make it an alternative to current methods of determining which cancer treatment is best suited to different patients.

What’s in a Whiff?

Normally, determining what treatment will work for people with non-small-cell lung cancer (NSCLC) is invasive and time-consuming. Immunotherapy, a type of treatment that equips the immune system to fight off cancer cells, is an option, but it’s only effective in about a fifth of patients. To see if it will work, doctors take tissue samples, sometimes from the lungs, and analyze them in a lab. In some cases, results can take weeks to come back. But the eNose, after analyzing a patient’s breath, can churn out results in less than a minute.

The device consists of a tube and seven sensors that sniff out particles in the breath of patients with advanced NSCLC. Think of it as a breathalyzer, but for determining cancer treatments.

When a patient breathes into the device, sensors analyze volatile organic compounds (VOCs), gaseous molecules that carry important information about our metabolic processes. Based on the presence of telltale biomarkers in the breath, the device is able to recommend whether immunotherapy is a good option or not.

The researchers took breath samples of 143 patients with advanced lung cancer two weeks before they started immunotherapy treatment. After three months, they analyzed the progress of the treatment to see if the eNose had prescribed an effective solution.

They concluded that 85 percent of those patients were prescribed the most effective treatment.

Besides being a quicker alternative to previous methods, the eNose is noninvasive. That means it offers a way to detect cancer without requiring doctors to snip any tissues from a patient’s body.

A Long Way to the Hospital

While the researchers are optimistic about the eNose’s potential, they also acknowledge that it might be a while before it becomes a regular diagnostic tool in hospitals.

Since these trials were conducted in a clinical setting, the dataset is lacking the perspective of a larger-scale lab trial among patients. In a press release, the researchers say that the results of this first trial lay the groundwork for further trials – likely something on a larger scale.

But, said study author and oncologist Michel van den Heuvel in the release, “We are convinced that this study merely scratches the surface.”

The science of using breath to churn out speedy diagnoses is in its beginning stages. But our exhalations have more potential than we realize.