Think taking pictures at the museum will enhance your experience? Think again. 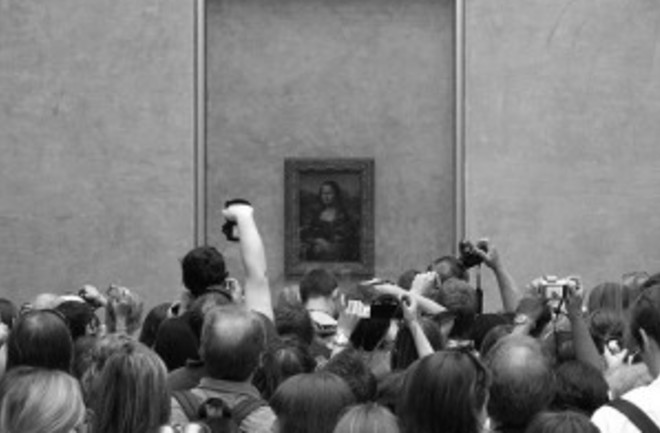 Ever gone to a museum and ended up behind one of those people who (annoyingly) takes a photo of every single painting? Well, joke's on them--according to this study, taking photos actually makes people less likely to remember the details of their visit compared with just looking at the painting with their eyes. According to the authors, "the act of photographing the object appears to enable people to dismiss the object from memory, thereby relying on the external devise of the camera to 'remember' for them." Interestingly, however, if the person zoomed in on a detail of the painting, the memory impairment effect went away. My question is this: does anyone out there actually go back and look at their hundreds of photos of paintings once they get home?

Point-and-Shoot Memories: The Influence of Taking Photos on Memory for a Museum Tour. "Two studies examined whether photographing objects impacts what is remembered about them. Participants were led on a guided tour of an art museum and were directed to observe some objects and to photograph others. Results showed a photo-taking-impairment effect: If participants took a photo of each object as a whole, they remembered fewer objects and remembered fewer details about the objects and the objects' locations in the museum than if they instead only observed the objects and did not photograph them. However, when participants zoomed in to photograph a specific part of the object, their subsequent recognition and detail memory was not impaired, and, in fact, memory for features that were not zoomed in on was just as strong as memory for features that were zoomed in on. This finding highlights key differences between people's memory and the camera's "memory" and suggests that the additional attentional and cognitive processes engaged by this focused activity can eliminate the photo-taking-impairment effect." Bonus quote from the full text: "In addition, the present study examined only the role of photographing objects, not what happens when people review those photos after taking them. Past work has shown that reviewing photos can provide valuable retrieval cues that reactivate and retain memories for the photographed experiences (e.g., Koutstaal et al., 1998; Koutstaal et al., 1999), although research has suggested that the sheer volume and lack of organization of digital photos for personal memories discourages many people from accessing and reminiscing about them (Bowen & Petrelli, 2011). In addition, despite the ease of social sharing of photos today, families spend less time together in person sharing and reviewing their digital photos than they did with physical prints and photo albums in the past (Nunes, Greenberg, & Neustaedter, 2009). Similar to the finding that reviewing notes taken during class boosts retention better than merely taking notes (Bui, Myerson, & Hale, 2013; Knight & McKelvie, 1986), it may be that our photos can help us remember only if we actually access and interact with them, rather than just amass them." Related content: NCBI ROFL: Absolut memory distortions: alcohol placebos influence the misinformation effect.NCBI ROFL: Knock knock! Who's there? Some random statement that you won't remember.NCBI ROFL: How your brain is like Google.