There Was an Old Lady Who Swallowed a Pen. Then Drs Found It...25 Years Later. And It Worked. 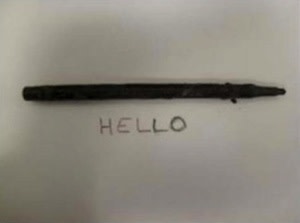 Stop me if you’ve heard this one before

. Long, long ago---well, in the 1980s---a middle-aged British woman noticed a spot on her tonsil. To get a better look, she grabbed a mirror, opened wide, and started poking around with a plastic felt-tipped pen---which is where she ran into trouble. The woman claimed that she slipped and fell, swallowing the pen in the process. But between the implausibility of consuming a pen and the fact that X-ray scans failed to reveal the writing implement, everyone assumed she had made up the story… Fast-forward 25 years to 2011, when the same woman began losing weight and suffering from diarrhea. At the hospital, a CT scan

revealed a slim foreign body, which turned out to be the pen. It was safely removed, and the woman wasn’t the only one to survive unscathed---in a twist happy ending, the pen still worked too. The moral of the case study

? It turns out that simple abdominal X-rays aren’t great at picking out plastic objects. And that, in the words of the authors, “Occasionally it may be worth believing the patient’s account however unlikely it may be.” But only occasionally. [via Improbable Research