There Is no Single ‘Gay Gene,’ Massive New Study Confirms 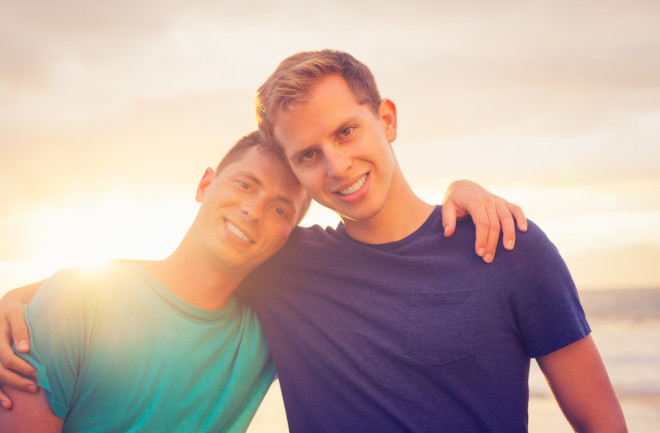 A new study into the genetics of same-sex attraction reveals how complex it is. (Credit: EpicStockMedia/Shutterstock)

In the largest study of its kind yet, researchers find no single gene influences whether a person engages in same-sex sexual behavior. Instead, like height, variations in many genes throughout the human genome contribute to sexual preference, researchers report Thursday in the journal Science. The work reiterates that there is a biological component to having a same-sex partner.

Neale and colleagues drew on data from nearly half a million people who submitted DNA samples to the genetic testing company 23andMe and the U.K. BioBank, a database of genomes and health information. Research participants completed questionnaires about whether they had ever had sex with someone of the same sex. When the researchers scanned the genomes of people who had reported same-sex sexual behavior, they found many variations in the genome that were associated to varying degrees with participants’ self-reported behavior. Five variants in particular seemed to have a larger impact.

“These genetic variants could hint at some biological pathways that may be involved in same-sex sexual behavior,” genetic epidemiologist Andrea Ganna, who led the research with Neale, said in the briefing. One of the five variants for example is linked to male pattern balding, which is closely tied to how the body controls sex hormones. The variant also sits in the genome near a gene involved in sexual development. The finding suggests there may be a relationship between same-sex sexual behavior and sex hormone regulation.

But if there is one, it’s small. All of the genetic variants the researchers identified together account for eight to 25 percent of the differences in same-sex sexual behavior. But the top five in aggregate only explain less than one percent of the variability in sexual behavior. It’s a reminder that, that like most human behaviors, sexual behavior is complex. Many individual genes play a role in sexual preference, and none is by itself predictive. What’s more, these genes interact with the environment in complex ways.

“Genetics is less than half of this story for sexual behavior but it’s still a very important contributing factor,” Neale added.