The voyage of Krishna Crusoe 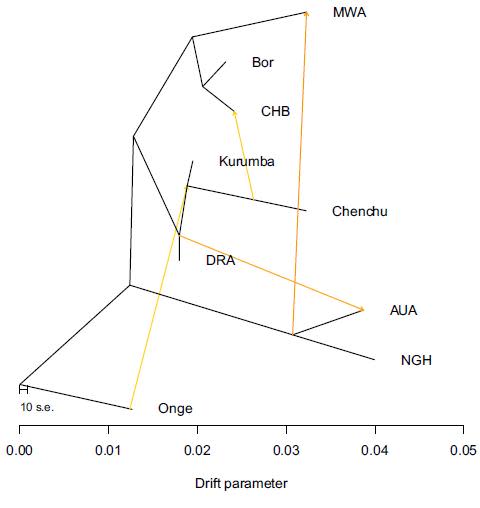 The above figure is from a paper which leaves me somewhat befuddled, Genome-wide data substantiate Holocene gene flow from India to Australia. The authors ran several hundred thousand SNPs through treemix, and generated the above graph which leads one to the conclusion that there has been significant gene flow from Indian populations to Australia. More precisely, from Dravidian populations to the Aboriginal peoples of Northern Australia. In plain English the authors found the tree which was the best fit to the data, and then they improved it by by adding migration across branches which were the poorest fits. Obviously the whole paper is not going to rest on the above graph. They performed some clustering analysis on the data, which you'll recognize. PCA and Admixture: 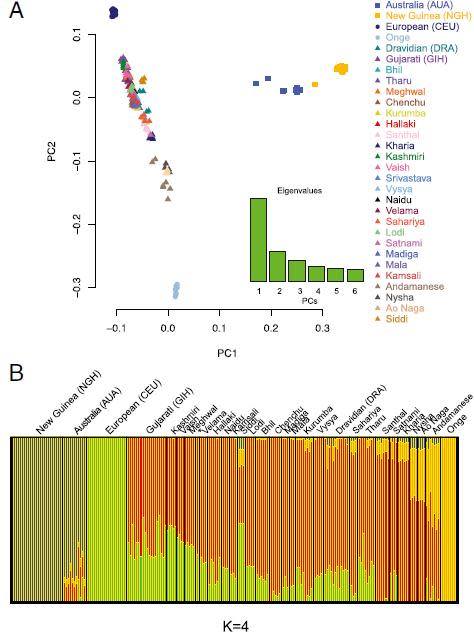 Additionally they ran f4 statistics to infer admixture by testing various trees of populations. They confirmed that there seemed to be some evidence of gene flow from India to these Australian Aboriginal populations which was not found in Papuans. Finally, they estimated that the admixture between these Indians and Northern Australians dates to ~4,320 years ago. I haven't ever used this method so I can't really say much about this, but I did not see any confidence interval in the paper or the supporting information. That's important to me because I want to know the window of this date of admixture, as that matters (I don't know the method well enough to know whether you can't really compute a confidence). The authors' general line of reasoning seems to be that there's a lot of modest evidence using separate methods pointing to this admixture, so we shouldn't dismiss it. Additionally, the date of admixture aligns with the change in archaeology and the introduction of the dingo, a wild dog which happens to resemble the feral populations of India. This seems a prudent way to go. But I have some reservations. First, it would be nice if we could see these Australian data. In the HGDP data set Papuans are used as proxies for Australasians. One wouldn't discern peculiarity in Australian admixture, because those data sets aren't floating around. As alluded to in many press treatments this is a political issue. Second, several years ago some of the best minds in human phylogenomics already tackled the issue of Australian affinities with other populations. One of the groups even had Indian samples and used some of the same Northern Australians. How is it that they didn't see this with clarity? 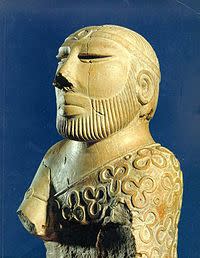 I am not convinced that this interpretation of the population genetic data is correct. There is something about the affinities of Australasians going by the Papuan samples which intrigues me. But I can't speak with any intuition about the Australians, because I have never touched Australian data. Of course I have become concerned with the abstruse and nearly opaque nature of statistical genetics. One solution is for a wide array of individuals to develop intuition by taking data and methods for a "spin." That's not likely in this case because of the sensitivity of this line of research And yet let's consider this paper as yielding a genuine result which will stand the test of time. What the hell does this mean? ~4,000 years ago there flourished in South Asia what we term the Indus Valley civilization. In the Near East this society was known as Meluhha. Because we can not read the script of the Indus Valley civilization they are silent to us, evident in literary documentation only as an aside in Mesopotamian chronicles. But we do know that the Meluhhans were active traders in the ancient Persian Gulf, and Mesopotamian accounting records note descendants of Meluhhan merchants resident in particular villages. 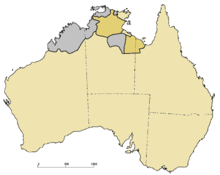 Language families of Australia We know that these people went west. But did they go east, even as far as Australia? It seems to me and others that if such an admixture occurred, and some elements of cultural changed were catalyzed by South Asians, it was an accident. A ship blown off course which somehow arrived on the shores of ancient Australia. This is where the genetics ends. We need to look at archaeology and folklore. Lingistics and anthropology. In a few years other workers will look at whole genome data from Australians and other populations. The question of their affinities will be definitively answered. Until then I suspect we'll muddle on....