The Ultimate Source of Malaria Is Found in Chimps 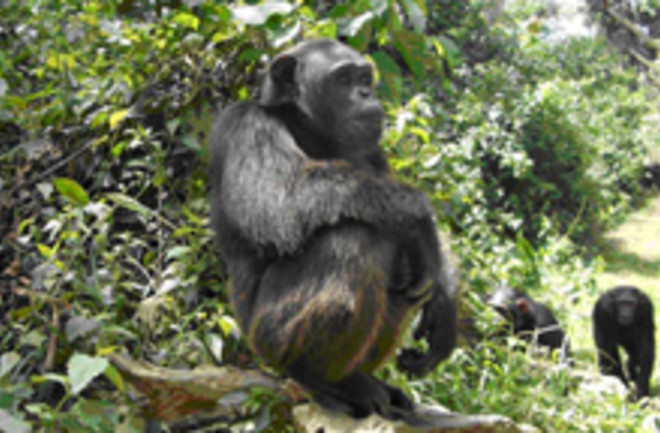 Researchers have determined how malaria first came to afflict humanity, and have laid the blame on our closest relative, the chimpanzee. Researchers have long known that chimps get infected with a malaria parasite of their own, called Plasmodium reichenowi, which is closely related to the human malaria parasite, Plasmodium falciparum, but they believed that the two parasites evolved from a common ancestor many millions of years ago and then developed on parallel tracks. Now a new genetic comparison

indicates that the human version more likely developed from the chimpanzee type [AP].

"Current wisdom that P. falciparum has been in humans for millions and millions of years is wrong," said study co-author Nathan Wolfe, director of the Global Viral Forecasting Initiative.... "We now know that there was a point in time when this was primarily a disease in chimpanzees that jumped and took hold in humans" [National Geographic News].

Malaria probably came to our species when mosquitoes that had previously fed on infected chimpanzees bit humans, Wolfe says, and the transmission may have happened as recently as 10,000 years ago. Malaria infects more than 300 million people each year, and kills more than 1 million annually--mostly children in the developing world. The new findings could aid researchers looking for an effective malaria vaccine, according to the study, published in the Proceedings of the National Academy of Sciences.

If chimp malaria doesn’t cause a serious infection in humans, but generates an immune response, ... it might be a good target for a vaccine [Wired.com].

The study is also a reminder that humans are always vulnerable to new infectious diseases crossing the species barrier.

"Today, human encroachment into the last forest habitats has further extended, leading to a higher risk of transfer of new pathogens, including new malaria parasites," the researchers warn [BBC News].

As if to illustrate the point, earlier this week another group of researchers announced that a new strain of HIV had been discovered in a Cameroonian woman, and that the virus appeared to come from gorillas. Related Content: 80beats: New HIV Strain Came to Humans from Gorillas, Not Chimps 80beats: Drug-Resistant Malaria in Cambodia Raises Fears of a Super Parasite 80beats: Promising New Malaria Vaccine Is Extracted From Irradiated Mosquito Spit 80beats: Experimental Malaria Vaccine Could Start Saving Lives by 2011 80beats: Researchers Decode the Genomes of Two Malaria ParasitesImage: Nathan Wolfe, Global Viral Forecasting Initiative