Zack Ajmal has posted his K = 11 Reference 3 resultsincluding Harappa Ancestry Project participants. Below are the results sorted by the East Asian, South Asian, and Onge. I limited it to those who had 5% or more East Asian. All caps = reference populations. The rest are individuals from HAP:

That's my parents at 12 and 11 percent East Asian. Using the new reference population Zack estimates that my "Ancestral South Indian" (ASI) is ~43%. That makes more sense to me that Dodecad's estimate of ~34%. I think that Dodecad method was confused because I do have genuine East Asian admixture, and the estimate of "Ancestral North India" (ANI) vs. ASI is confounded by other components. I suspect that the estimates of Onge are probably less valid for groups like the Khasi because of bleeding over from the East Asian component (in other words, the regression which Zack used to predict ASI is fitted to South Asian populations without East Asian admixture, and isn't fully transferable to those that have it). But the geographical breakdown of the East Asian element is pretty striking, if expected. The Bengalis have more East Asian than other Indians, as you'd expect. Here are all the HAP individuals + reference populations as points on a two dimensional plot: 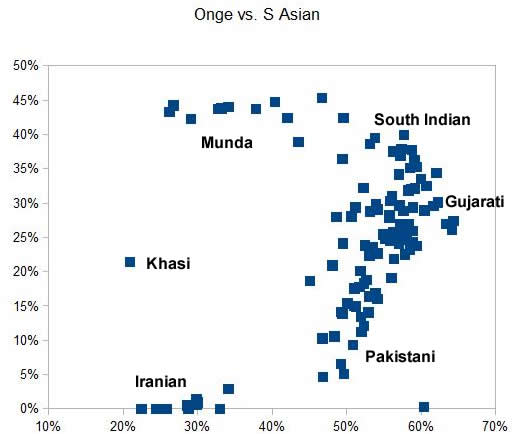 Now let's zoom in the far right section with labels: 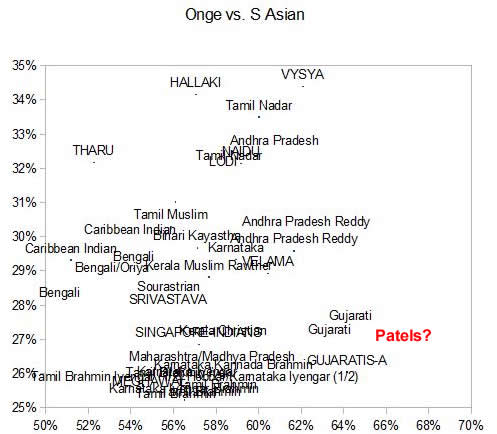 Zack has stated that the Gujaratis in his sample are Patels, and they seem to cluster with the Gujarati subset in the HapMap which is very South Asian (what I termed "Gujarati_B" and Zack "Gujarati_A"; I'll go with Zack's terms in the future). So I think we've solved the mystery of the endogamous cluster in the Houston Gujarati HapMap sample. They're Patels. I wanted to create a 3 plot that works. With South Asian, Onge, and East Asian components specifically. I generated one that I could manipulate in R, but I don't have time to figure how to turn it into an applet or gif. So I recorded me manipulating the cube and converted it into an swf. The two Bengalis who project "outside of the plane" are my parents. And notice that the Khasi are also outliers. You can download the file here. If you resize file after you open it it might pixelate, so be careful! Also, here's a merged spreadsheet for K = 11 with reference + HAP project members, with ethnicity information included for the latter.