The real end of science 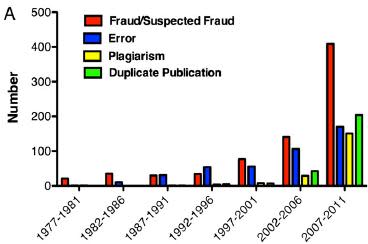 Fifteen years ago John Horgan wrote The End Of Science: Facing The Limits Of Knowledge In The Twilight Of The Scientific Age. I remain skeptical as to the specific details of this book, but Carl's write-up in The New York Times of a new paper in PNAS on the relative commonness of scientific misconduct in cases of retraction makes me mull over the genuine possibility of the end of science as we know it. This sounds ridiculous on the face of it, but you have to understand my model of and framework for what science is. In short: science is people. I accept the reality that science existed in some form among strands of pre-Socratic thought, or among late antique and medieval Muslims and Christians (not to mention among some Chinese as well). Additionally, I can accept the cognitive model whereby science and scientific curiosity is rooted in our psychology in a very deep sense, so that even small children engage in theory-building. That is all well and good. The basic building blocks for many inventions and institutions existed long before their instantiation. But nevertheless the creation of institutions and inventions at a given moment is deeply contingent. Between 1600 and 1800 the culture of science as we know it emerged in the West. In the 19th and 20th centuries this culture became professionalized, but despite the explicit institutions and formal titles it is bound together by a common set of norms, an ethos if you will. Scientists work long hours for modest remuneration for the vain hope that they will grasp onto one fragment of reality, and pull it out of the darkness and declare to all, "behold!" That's a rather flowery way of putting the reality that the game is about fun & fame. Most will not gain fame, but hopefully the fun will continue. Even if others may find one's interests abstruse or esoteric, it is a special thing to be paid to reflect upon and explore what one is interested in. Obviously this is an idealization. Science is a highly social and political enterprise, and injustice does occur. Merit and effort are not always rewarded, and on occasion machination truly pays. But overall the culture and enterprise muddle along, and are better in terms of yielding a better sense of reality as it is than its competitors. And yet all great things can end, and free-riders can destroy a system. If your rivals and competitors and cheat and getting ahead, what's to stop you but your own conscience? People will flinch from violating norms initially, even if those actions are in their own self-interest, but eventually they will break. And once they break the norms have shifted, and once a few break, the rest will follow. This is the logic which drives a vicious positive feedback loop, and individuals in their rational self-interest begin to cannibalize the components of the institutions which ideally would allow all to flourish. No one wants to be the last one in a collapsing building, the sucker who asserts that the structure will hold despite all evidence to the contrary. Deluded as most graduate students are, they by and large are driven by an ideal. Once the ideal, the illusion, is ripped apart, and eaten away from within, one can't rebuild it in a day. Trust evolves and accumulates it organically. One can not will it into existence. Centuries of capital are at stake, and it would be best to learn the lessons of history. We may declare that history has ended, but we can't unilaterally abolish eternal laws. Update: