The Race to Treat a Seizing Child

A toddler's neurological outburst leads to a clinical guessing game. 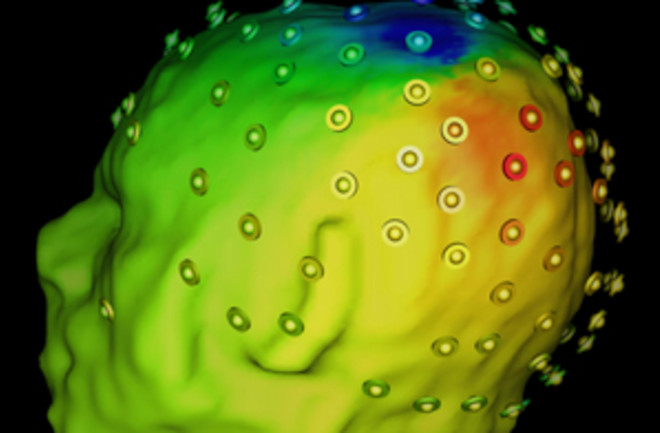 “Help! Doctor! Somebody help me!”

I ran out of my office toward the sound of the woman’s panicked voice. She was in the hallway outside one of my examination rooms, holding a 1-year-old child in her arms. The child’s body was stiff, her head tilted back, her arms and legs moving rhythmically. Her eyes were open, but she was not looking at her mother or at anyone else. She was having a generalized seizure.

Few things are as terrifying as a child having a seizure. Even though I’ve seen many seizing infants and children during my more than 25 years as a pediatrician, I have never gotten used to it.

The very word seizure hints at something suddenly taking hold of a person and changing his or her nature. The Hmong people of the highlands of Laos describe a seizure as qaug dab peg—a phrase that translates as “the spirit catches you and you fall down.” (The translation is the title of Anne Fadiman’s fascinating 1997 book about cultural differences in medical care.) The expression represents a belief in many cultures that the something taking hold of a person having a seizure is spiritual or divine.

Divine intervention was the furthest thing from my mind as I lifted the child out of her mother’s arms and headed for the treatment room. I needed to have her in a safe place, with access to oxygen and other therapies, and then assess what was happening and decide what to do about it. I saw that she was still stiff and unresponsive and that her arms and legs were still making rhythmic movements, but thankfully she was breathing and her lips were pink. I had some time.

A seizure is a symptom of something going on in the brain. Any of us could potentially have one, if our brain happened to be subjected to a strong enough precipitating stimulus, such as trauma, infection, or a sudden drop in blood sugar. With any of these stimuli, the complex and finely coordinated electrical activity of the brain’s cortex suddenly degenerates into a storm, a widespread, rhythmic, but purposeless pattern of electrical activity.

Imagine for a moment a huge auditorium filled with people carrying on hundreds of individual quiet conversations. Now imagine that, at the same split second, all those people suddenly begin shouting out a single meaningless sound in unison, over and over again, as if led by some maniacal cheerleader. That’s something like what happens in the brain during a seizure.

I reached the treatment room and placed the child on the examining table. One of the nurses attached the leads of a cardiorespiratory monitor, noting that the girl felt quite warm. “Let’s check her temperature and oxygen saturation,” I said to the nurse, “and bring the oxygen over in case we need it.”

“Do you think you’re going to admit her?” the nurse asked me.

“Not necessarily,” I said. If the child did have a fever and her seizure stopped within 15 minutes, and if her subsequent exam proved normal, this might be just a simple febrile seizure. Common in children between about 6 months and 5 years of age, such seizures carry an excellent prognosis, requiring neither hospitalization nor medication.

“Let’s get an IV started just in case, and draw up some Ativan.”

If the seizure persisted, I wanted to have medication ready. At this point, however, I would simply watch and wait, hoping that, like most seizures in children, this one would stop fairly quickly.

But I noticed something worrisome: The child’s eyes were not staring straight ahead but were deviated to the right. This was a subtle but significant clue, and I filed it in my mind as I continued the assessment.

I turned to the child’s mother, who stood, pale and shaky, nearby.

“Has she ever had anything like this before?” I asked her.

“When did she start getting sick?”

“She started running a fever this morning. That’s why I made the appointment.”

“Did she have any other symptoms? Vomiting, rash, any sign of pain?”

“No,” the mother replied.

The nurse interrupted: “Her temperature is 103.1.” That was high, but not excessive for a 1-year-old. Again, young children often run very high fevers with minor viral illnesses. I looked at the child once more. In these situations, continued reevaluation is critical.

To my relief, in just minutes the seizure stopped. The little girl was lying quietly on the table, still pink, still breathing. I checked the oxygen monitor: 97 percent. Good. Now I could relax a bit, but I had to keep probing. What had caused this little girl’s seizure? Was it an indication of something that we needed to treat right away? Was she likely to start seizing again very soon? While many conditions can cause a seizure in a child, they fall into only a few common categories. I mulled them over as I began to examine her again, and I ticked off the possibilities.

Highest on the list of causes is infection. Fevers that trigger seizures are most often due to flu, cold, or ear infection, but they can also be due to meningitis. Thanks to modern immunizations, this dreaded infection of the fluid and membranes that surround the brain and spinal cord is nowhere near as common as it once was. I began to make a mental list of tests I would need for this child, and the first one was a lumbar puncture, or spinal tap, to sample her cerebrospinal fluid and rule out meningitis.

Another possible cause of a seizure is a mass inside the brain, such as a brain tumor. I recalled that the child’s eyes had been gazing to one side during her seizure, and now I noticed that, even though the seizure had stopped, she was holding her left arm and leg in an oddly stiff posture. The subtle asymmetry of her eyes and extremities suggested to me that this child’s seizure was focal. Focal seizures may be triggered by something going wrong in a specific location in the brain. The problem can sometimes turn out to be, among other things, a tumor. An MRI scan went on the to-do list. I was not going to send this child home tonight.

Some children’s brains are simply prone to having seizures. We say that such a child has a seizure disorder, which is also known as epilepsy. We think there is some area of scar tissue or other irregularity in the brain’s cortex that acts as an “irritable focus”; it can suddenly trigger a seizure, frequently with no provocation at all. This irritable focus often shows up on an electroencephalogram (EEG), a recording of the brain’s spontaneous electrical activity. Fortunately, some medications can decrease the frequency of seizures in people with epilepsy. The drugs have some side effects, but most patients can live healthy and active lives. However, the focal nature of the seizure I had just witnessed had me very worried that this little girl might have something worse inside her brain.

I telephoned a pediatric colleague and ar­ranged for the child to be transported to the hospital. I checked the reports in the computer as they came in over the next couple of days. I was pleasantly surprised to find that her spinal fluid was normal, her MRI did not show a tumor or any other abnormality, and her EEG showed perfectly normal brain activity with no sign of a seizure focus. The pediatric neurologist decided that she did not have epilepsy and did not need to be treated with anticonvulsant medication.

She is home now, and doing wonderfully. With any luck she’ll never have another episode like this one. So why did she have a seizure? We can’t explain it, other than to chalk it up to the mystery of a child’s brain. In this case, I was delighted to have been wrong.

Mark Cohen is a pediatrician with Kaiser Permanente in Santa Clara, California. The cases described in Vital Signs are real, but names and other details have been changed.