Economists in the last few years have been shifting toward testing their theoretical models, whether through the experiments of behavioral economics, or, "natural experiments." The reason economists have had issues with testing their models is that experimentation on humans has some natural constraints. Macroeconomists have an even greater problem, as experimentation on whole societies not only presents ethical conundrums, but there's no way to fund or implement experiments on this scale. Macroeconomists turn out to be the paleontologists of economics. Of course economists aren't the only ones who've had this sort of problem with humans. The reason that geneticists focused on organisms such as flies, mice and fish is partly that these taxa breed fast and are easy to maintain in laboratories. But obviously there are things you can do, such as mutagenesis, with model organisms which you can not do with humans. Human genetics has traditionally relied on "natural experiments" of a sort, inbred lineages, recurrent recessive diseases, etc. Genetics has been a supplementary handmaid to medicine by and large. But sometimes history can load the die in genetics' favor as well. 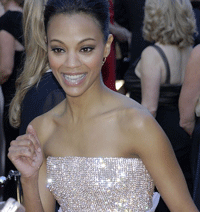 During the "Columbian Exchange" the New and Old World engaged in a massive transfer of ideas and individuals. The Old World received potatoes, maize, and tomatoes (to name a few). The New World...well, the New World received black people and white people. As documented in works such as 1491 the indigenous populations of the New World collapsed with the introduction of Old World diseases. Native peoples disappeared from the Caribbean, and were marginalized on the mainland excepting ecologically remote (e.g., the Guatemalan highlands) or forbidding (e.g., the Peruvian highlands) regions. But of course despite the obliteration of indigenous cultural self-consciousness and identity, the native populations did not totally disappear, they persisted genetically in the numerically dominant mestizo populations of much of Latin America. You don't need genetics to understand what happened, books like Mestizaje in Ibero-America outline in detail using conventional historical archives how Spanish men arrived in New World and entered into relationships with indigenous women. Often several at a time, in contravention of the Catholic Church's requirement of monogamy. But in the post-genomic era we have more to go on than impressions, we can quantitize the extent and nature of the admixture, something of importance when considering medical research. A new paper in PNAS adds some more to the growing body of results on Latin American genomics by including populations which have traditionally been overlooked, and also putting a spotlight on the long term impact of sex-biased admixture. Genome-wide patterns of population structure and admixture among Hispanic/Latino populations:

Hispanic/Latino populations possess a complex genetic structure that reflects recent admixture among and potentially ancient substructure within Native American, European, and West African source populations. Here, we quantify genome-wide patterns of SNP and haplotype variation among 100 individuals with ancestry from Ecuador, Colombia, Puerto Rico, and the Dominican Republic genotyped on the Illumina 610-Quad arrays and 112 Mexicans genotyped on Affymetrix 500K platform. Intersecting these data with previously collected high-density SNP data from 4,305 individuals, we use principal component analysis and clustering methods FRAPPE and STRUCTURE to investigate genome-wide patterns of African, European, and Native American population structure within and among Hispanic/Latino populations. Comparing autosomal, X and Y chromosome, and mtDNA variation, we find evidence of a significant sex bias in admixture proportions consistent with disproportionate contribution of European male and Native American female ancestry to present-day populations. We also find that patterns of linkage-disequilibria in admixed Hispanic/Latino populations are largely affected by the admixture dynamics of the populations, with faster decay of LD in populations of higher African ancestry. Finally, using the locus-specific ancestry inference method LAMP, we reconstruct fine-scale chromosomal patterns of admixture. We document moderate power to differentiate among potential subcontinental source populations within the Native American, European, and African segments of the admixed Hispanic/Latino genomes. Our results suggest future genome-wide association scans in Hispanic/Latino populations may require correction for local genomic ancestry at a subcontinental scale when associating differences in the genome with disease risk, progression, and drug efficacy, as well as for admixture mapping.

The issue here is that "Hispanic" and/or "Latino" is not a race. In fact, as American readers may be aware the category emerged in 1970 as a way of organizing ethnic and racial identity for the Census. Despite a real pan-American consciousness there is obviously a great deal of cultural and genetic variation in Latin America. Caribbean nations which a large African component have a different identity from Mexico, where the non-Spanish segment is indigenous. Conversely, Argentina has a self conception as a white nation, despite some ambiguity in genetics. In this paper they focused on 100 individuals from Mexico, Columbia, Ecuador, Dominican Republic and Puerto Rico. This gives them a good coverage of different regions of Latin America, and also looks into populations which are not often included in these studies, such as Dominicans. A series of figures highlights the primary results. I've rotated this figure to maintain its resolution. It's a Frappe analysis of the ancestry of individuals within various populations assuming K ancestral populations. With Latin Americans the idea of ancestral populations makes a bit more sense, since we know what the ancestral populations are! They use the HGDP populations as a reference for points of comparison.

Since we're focused on native, Africa and white ancestry, K = 3 is probably more important. No surprise that the Latin America populations exhibit variation in ancestral quanta within them. Some Mexicans look like Europeans. Some Mexicans look like Native Americans. And some Mexicans look mixed. I assume that most readers are aware of this, assuming that they encounter Mexicans at all in their daily life. Of course the ancestry came in through different avenues. The sexual exploitation of black females by white males in the United States is well known, but it does seem that the same dynamic, at least in terms of the genetic combination, existed in Latin America for much of its history, with black females being complemented by indigenous females. Figure 5 illustrates this well. You see the various Latin American populations (the abbreviations should be obvious). The boxes span the 1st to 3rd quartile in ancestry within each subpopulation from each respective ancestral group (the whiskers represent the ranges). Note the differences between the X chromosome, which spends 2/3 of its time in females, and the autosome, which is not sex biased.

Ah, but we can get more precise than that. They typed these individuals on their mtDNA, which is passed purely through women, and their Y chromosomes, which is passed purely through men. These loci do not recombine, and so are transmitted in such a manner that it is relatively easy to reconstruct their phylogenies. There has been a great deal of phylogeographic exploration of these two loci. In the next figure what you see are the position of the individuals in this study in terms of total genome content distance from the three ancestral populations, but, the color of their positions is dictated by the origin of their mtDNA and Y lineages. 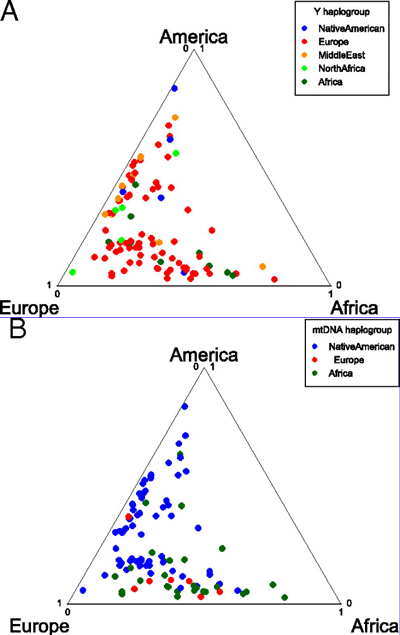 The top panel are male lineages, and the bottom panel are female lineages. The preponderance of European ancestry, in relation to native and African ancestry, seems rather clear on the autosomal genome. There is admixture, but you have more people concentrating at the European vertex than at the other two. Most of the Y lineages, presumably men, are European. Some are African, and a few are native. Interestingly they note in the text that several lineages associated with North Africa and the Middle East are found in these populations. Why? The answer seems relatively simple: they were brought by the Muslim invaders, or were Jews, who later became Christian. There have been many phylogeographic analyses of Y lineage distributions, and believe it or not Iberia and North Africa are actually strongly differentiated. The Middle Eastern lineages I'm betting are from Sephardic Jews; most of the "Moors" who settled in Spain are likely to have had more Berber than Arab ancestry. The maternal lineages show a really interesting pattern. There are a preponderance of native mtDNA lineages, and a significant number of African ones. But notice that most people of overwhelming European ancestry nevertheless retain a native maternal lineage! We saw this in Argentina, a population which identifies as white, seems to be highly admixed on the mtDNA. I suspect that what you're seeing is the long reach of the first mothers, whose descendants intermarried with Spanish men who relocated to the New World. The Aztec and Inca nobility gave their daughters to the Spaniards who arrived, and I suspect that the predominantly European elites of Latin America still carry those lineages with them, despite their overwhelming limpieza de sangre. Another important point is that both Dominicans, and especially Puerto Ricans, carry signatures of these first mothers (as well as total genome content). 20 of 27 Puerto Ricans carry native mtDNA. This is somewhat shocking, as these Caribbean islands were reputed to have been nearly devoid of indigenous populations only a generation after First Contact, in large part due to disease. Which brings me back to Neandertals. Non-African humans may carry somewhat less than 5% of their ancestry from this population. But to my knowledge there is no cultural continuity, and we do conceive of ourselves as fundamentally different from the Neander-kind.

And yet genetically the Neandertals are highly successful through us

The chaos, havoc, and population collapse wrecked by the Europeans when they encountered native New World populations may be somewhat analogous to what happened to archaic groups who had to face the oncoming demographic blast of African humans. And yet some of the genetic material of the locals was absorbed just before their extinction. The half-Taino children whose fathers were Spanish may have had the genetic defenses of European diseases which allowed them to survive the hardships of their lives. Granted, these children lost a genuine connection with their Taino ancestors, but the descent of those native peoples still persists onward. Interestingly, some readers of this weblog have had the same reaction to the idea that Neandertals persist in our own genome. Ultimately the reaction and response to this is not a scientific issue, but a normative one. Dare I even say, a spiritual one? Citation:

Bryc K, Velez C, Karafet T, Moreno-Estrada A, Reynolds A, Auton A, Hammer M, Bustamante CD, & Ostrer H (2010). In the Light of Evolution IV: The Human Condition Sackler Colloquium: Genome-wide patterns of population structure and admixture among Hispanic/Latino populations. Proceedings of the National Academy of Sciences of the United States of America PMID: 20445096