The Poppy's Secret: Scientists Find the Genes That Make Morphine 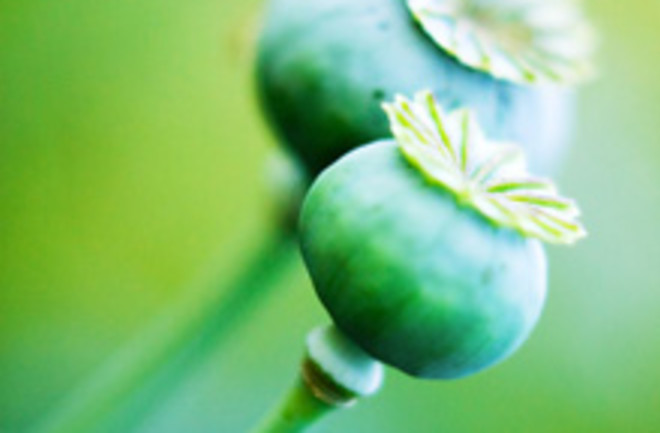 For millennia, humans have used the codeine and morphine of the poppy plant as painkillers—or recreational drugs. For the last half-century, says Peter Facchini, biologists have tried to unlock just how the plant produces these powerful chemicals, and wound up frustrated. But now, in a study in Nature Chemical Biology, Facchini's team says it has isolated the two genes that are the key to this process, which scientists could use to create some of medicine's most valuable chemicals without the fields of poppy plants that give rise to the trade of illegal narcotics, especially heroin. Both of the genes produced

enzymes that helped to convert precursor chemicals. One, thebaine 6-O-demethylase (T60DM), had a role in the production of codeine. The other, codeine O-demethylase (CODM) transformed codeine into morphine [Press Association]

. Lead author Jillian Hegel, Facchini's grad student, studied four different poppy relatives and sifted through a library of 23,000 genes to find these two. She put these genes into E. coli bacteria that sat overnight in a flask with a chemical called thebaine that's present in poppy seeds to see if the bacteria would synthesize the painkillers.

“When she came back the next morning, the thebaine was all gone,” says Facchini. “That’s when her eyes got big…. Finding it all had been turned into morphine — that gives a grad student a great sense of power, when they can make morphine” [Science News]

. There are several upshots to Hegel and Facchini's find. First, they say, finding both the enzymes and the genes responsible for them means that scientists are much closer to the possibility of creating these painkillers without the poppy plant,

. Getting vats of microbes to produce the drugs could also be cheaper and more efficient than cultivating vast poppy fields. In addition, the finding may someday sweep away the inefficient current method of making codeine. The poppy produces it naturally, but in smaller quantity than morphine, so drug-makers usually synthesize codeine from morphine. However, Facchini says,

"With this discovery, we can potentially create plants that will stop production at codeine [and so not produce morphine]. We are also working towards the synthesis of codeine and other opiate drugs more efficiently and economically in controlled bioprocessing facilities" [The Independent]

. Lastly, there's the reality that

. Theoretically, scientists could use engineered viruses to shut down the opiate-producing genes in the poppies of say, Afghanistan, to crush the illegal drug trade. But beyond the sheer difficulty of executing such a thing, the political consequences of such hubris could be unpredictable, Charles S. Helling of the State Department's narcotics division tells Science News. Related Content: DISCOVER: The Biology of Addiction DISCOVER: Vital Signs, all our medical mysteries 80beats: To Help Heroin Addicts, Give Them... Prescription Heroin? 80beats: A Prompt Dose of Morphine Could Cut PTSD Risk for Wounded Soldiers