The politics of genetic history in India

A reader pointed me to an article, Aryan-Dravidian divide a myth: Study. Some of the authors of the paper I reviewed today (actually, I wrote the post yesterday and put it in schedule) had some interesting things to say:

The great Indian divide along north-south lines now stands blurred. A pathbreaking study by Harvard and indigenous researchers on ancestral Indian populations says there is a genetic relationship between all Indians and more importantly, the hitherto believed ''fact'' that Aryans and Dravidians signify the ancestry of north and south Indians might after all, be a myth. ''This paper rewrites history... there is no north-south divide,'' Lalji Singh, former director of the Centre for Cellular and Molecular Biology (CCMB) and a co-author of the study, said at a press conference here on Thursday. Senior CCMB scientist Kumarasamy Thangarajan said there was no truth to the Aryan-Dravidian theory as they came hundreds or thousands of years after the ancestral north and south Indians had settled in India. The study analysed 500,000 genetic markers across the genomes of 132 individuals from 25 diverse groups from 13 states. All the individuals were from six-language families and traditionally ''upper'' and ''lower'' castes and tribal groups. ''The genetics proves that castes grew directly out of tribe-like organizations during the formation of the Indian society,'' the study said. Thangarajan noted that it was impossible to distinguish between castes and tribes since their genetics proved they were not systematically different. ... ''The initial settlement took place 65,000 years ago in the Andamans and in ancient south India around the same time, which led to population growth in this part,'' said Thangarajan. He added, ''At a later stage, 40,000 years ago, the ancient north Indians emerged which in turn led to rise in numbers here. But at some point of time, the ancient north and the ancient south mixed, giving birth to a different set of population. And that is the population which exists now and there is a genetic relationship between the population within India.'' ... The researchers, who are now keen on exploring whether Eurasians descended from ANI, find in their study that ANIs are related to western Eurasians, while the ASIs do not share any similarity with any other population across the world. However, researchers said there was no scientific proof of whether Indians went to Europe first or the other way round.

To understand some of these assertions you have to know that in India there are Creationist-like movements driven by nationalist and Hindu fundamentalist ideologies. There's been a lot of debate for decades in India about the Aryan Invasion Theory, which posits that Aryans, generally described as light-skinned northerners, overran the Indus Valley Civilization and subjugated the local peoples. Some Indian groups actually adhered to this, but overall the trend has been sharply against it because white nationalists were big proponents of it, and used it to suggest that the peoples of India are mongrelized degenerates who received the gift of civilization from racially superior Europeans. Today many Indians espouse an Out of India theory. I don't really agree with either position. The Out of India theory is almost certainly just plain wrong. The Aryan Invasion Theory is a caricatured fact (in contrast to a stylized fact). But first let me quote something from the paper itself:

Two features of the inferred history are of special interest. First, the ANI and CEU form a clade, and further analysis shows that the Adygei, a Caucasian group, are an outgroup...Many Indian and European groups speak Indo-European languages, whereas the Adygei speak a Northwest Caucasian language. It is tempting to assume that the population ancestral to ANI and CEU spoke 'Proto-Indo-European', which has been reconstructed as ancestral to both Sanskrit and European languages, although we cannot be certain without a date for ANI-ASI mixture.

This is from the paper that these authors are listed on, but probably written by David Reich. They seem to be going in opposite directions here. I actually think that this section would best be left to the supplements, and other sections of this paper emphasize the likely complexity of the ANI-ASI mixture process. But in the quotes in the media above the other authors seem to be leading you to totally different conclusions from this, instead of leaning toward ANI being Proto-Indo-European, they deny that it is. Instead of demurring on a specific date, they clearly believe that ANI-ASI admixture predates the arrival of Aryans and Dravidians. The second suggests that the authors don't believe in Out of India, look again at this passage: "Kumarasamy Thangarajan said there was no truth to the Aryan-Dravidian theory as they came hundreds or thousands of years after the ancestral north and south Indians

India." The plausibility that the ancestral ANI-Europeans are native to India seems low to me. Dienekes lays out the reasons:

The authors are correct that this study does not prove the Aryan Invasion Theory (though frankly I believe the first author goes a bit further than I would be willing to go in that very direction!). One would also be correct to suggest that there are ways to salvage the Out of India Theory for the origin of the Indo-European languages, but as Dienekes notes above, they are not genetically parsimonious. Possibility does not equal probability. Additionally, the full range of philological and archaeological data simply do not support the Out of India Theory. In my arguments with South Asian proponents of Out of India Theory I get a sense of arguing with Creationists; they are excellent at bringing up ambiguities and problems in the standard model, but they are blithely unconcerned with the total implausibility of the alternative model that they offer. There is zero chance of them being convinced, they simply need "good enough" arguments to keep you unbalanced. Now, let me state something clearly: on average an individual from an Indo-Aryan or Dravidian speaking group in South Asia is going to be more closely related genetically in terms of total genome content to anyone in the Indian subcontinent from Indo-Aryan or Dravidian speaking groups than they are to some from outside the Indian subcontinent. Punjabis may bridle at being associated with what they perceive as racially inferior Tamils and Bengalis, but the reality is that they're closer to these groups than they are to Persians or other West Asian groups (though Punjabis are much closer to Persians than Tamils and Bengalis are, and the Iranian speaking groups of Pakistan are a more ambiguous case). That does not negate significant clines, as well as suggestions of exogenous input (the last point is one "Scythian" descended Northwest Indians can take succor from). Mixed-race Brazilians may form a distinct cluster separate from Portuguese, West Africans and Amerindians, but they are clearly a racial compound of these three groups. The analogy with South Asians is problematic insofar as I think that an overly simple model of admixture may mislead us down the line, but it shows that just because South Asians are a coherent genetic cluster does not mean that they are uniform, or that they all exhibit equal relatedness to other groups. Finally, I took figure 3 from the paper, and recoded the Indo-European and Dravidian clusters so you can see the effect of language & caste. 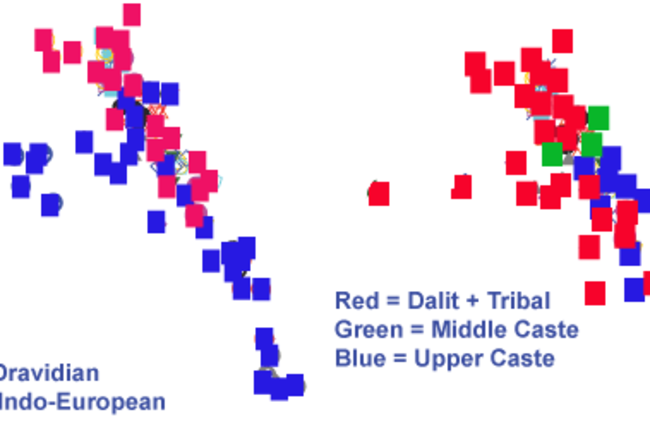