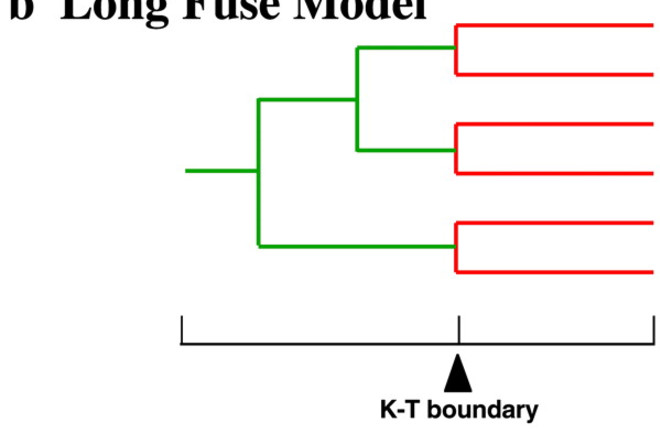 Spinger et al. doi: 10.1073/pnas.0334222100 By this time I'm sure you've encountered articles about the reconstructed last common ancestor of all placental mammals.

, along with a link to a moderately skeptical piece by Anne Yoder in Science. Yoder's piece is titled Fossils vs. Clocks, while the original paper is The Placental Mammal Ancestor and the Post–K-Pg Radiation of Placentals. The results clearly support the "Explosive Model" in the figure to the left for the origination of placentals. That might prompt the thought: "isn't this what we knew all along?" The standard story for the last generation in the popular imagination is that a massive asteroid impact was the direct cause of the extinction of all dinosaurs (and of course a host of other groups) except the lineage which we now term birds. And yet it turns out that there is actually some debate about this, though at least in some form it seems likely that the impact is going to be important (see this Brian Switek piece for exploration of this issue, and the general opinion of the scientific literature as of now). The second aspect to focus on is timing. Contrary to the intuition of many, over the past 20 years molecular phylogenetics has inferred a very definite (on the order of tens of millions of years) pre-K-T boundary coalescence for the common ancestors of the disinct mammalian lineages. A plausible explanation for this is that these lineages diversified through allopatry, as the Mesozoic supercontinent fragmented. Morphological diversification of these mammalian lineages also may have occurred after the K-T event. The reality is that I know little more about this domain than the "typical person off the street," so why does this matter? It matters because the difference between model a and model b above impacts our assessment of the nature of the K-T event, and the construction of the "tree of life" in general. For example, if model a, that the diversification of placental mammals was an explosive event after the K-T boundary, with extant lineages derived from one common ancestor, is correct, was the selection of this ancestor a matter of chance, or did it have exaptations which allowed it to traverse the boundary? In contrast, if there were many different mammalian lineages which traversed the boundary than perhaps the nature of the diversification is less contingent? In regards to the K-T boundary issue, it seems on the face of it rather peculiar that anything but extreme circumstances which included the scale of an asteroid impact (perhaps with other necessary conditions). These aren't trivial questions, and it is within this context that we need to frame our understanding of how life on earth came to be the way it came to be. An issue which is of more direct interest to me is the long standing conflict between molecular phylogenetics and paleontology. In short, the paleontology seems to support the explosive model. This paper, using morphological traits in a phylogenetic context does just that. In contrast molecular phylogeneticists have long perceived there to be relationships on may genes which pre-date the boundary. So many in fact that it simply isn't plausible from a genetic perspective that these groups were not reproductively isolated tens of millions of years before the K-T boundary. Yoder points out that the methods of the molecular phylogeneticists is not entirely comparable with that of this paper. And, critically, she suggests that estimation of the branch lengths in the nodes is a weak link within their argument. If you believe that paleontology speaks truly, then you believe in this paper. If you accept the robustness of molecular phylogenetic calibrations of the evolutionary rates of genetic change, than this paper's dating of the diversification is unpersuasive. Where do I stand? In more recent questions of human evolution (e.g., the divergence between chimps and humans) the molecular phylogeneticists won, and the bones contingent were wrong. But that is just one lineage. I have a hard time believing that the paleontologists could be wrong about such much. Obviously there's an error in the assumptions somewhere within these scientific disciplines, but I can't pinpoint it. Citation: M. O'Leary et al., DOI: 10.1126/science.1229237