The origin of "humans"

I've always had an interest in human origins, and have been an avid consumer of books and papers relating to the emergence of our own species through an evolutionary lens. Though I am interested in paleontology, my own bias has been to look toward the genetic evidence because it is more accessible (that is, paleontology focused on morphological characters presupposes a knowledge of anatomy and general familiarity with osteology which I lack). Because of my age some of the works which I stumbled upon were from the 1970s, during which a debate had erupted between Allen Wilson, who argued for a recent divergence between human and great ape lineages based on molecular evolutionary data, and more traditional paleoanthroplogists who appealed to morphological data to support an ancient origin for the human lineage (perhaps during the time of Proconsul). The discovery of Lucy, and growing familiarity with the power of molecular evolution, tilted the argument in favor of Wilson and his partisans, and the older school conceded. In the 1990s Richard Leaky recounted this experience to explain why he tended to be tentative about challenging the Out of Africa Hypothesis promoted by the Wilson group in the 1980s based on mitochondrial DNA. Set against the Out of Africa model were the Multiregional Hypothesis proponents, who recast themselves as heirs to a venerable tradition in evolutionary anthropology which had reconstructed itself on more rigorous foundations (see Race & Evolution by Milford Wolpoff and Rachel Caspari). Because of public interest in this topic television shows such as PBS' NOVA even covered the debate between the partisans of "African Eve" and the older school of the Multiregionalists. The public presentation was stark, making a distinction between the molecular biologists around Allan Wilson, and the more conventional morphologically oriented physical anthropologists around Milford Wolpoff. Of course, this was a caricature, insofar as Chris Stringer, a fossil oriented anthropologist, prefigured the general African Eve model and the concept of total replacement of Neandertals in Europe by H. H. sapiens. Similarly, in Origins Reconsidered Richard Leakey told of how a group of geneticists cornered him at a conference and encouraged him not to accept the conclusions of the Wilson group. There were several revisions of the technical details of the original mitochondrial Eve paper and its methodology based on critiques from within the community of phylogeneticists. 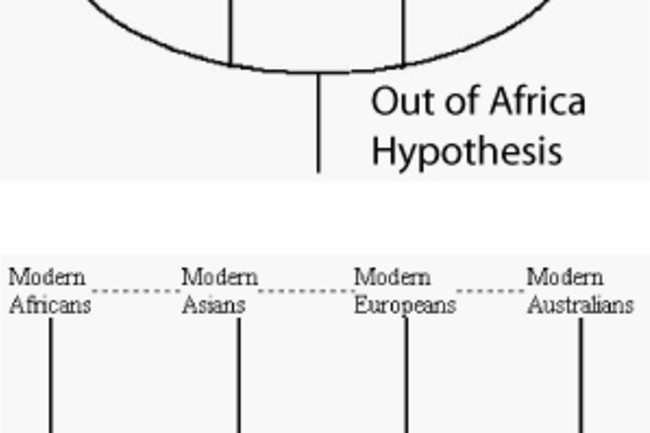 The dichotomy between these two models became a cultural phenomenon, and both groups attempted to gain advantage by using taboos and shibboleths to show that theirs was the truly "progressive" scientific theory. The Out of Africanists spun our recent common ancestry from the African contintent as a decisive refutation of ideas which posited differences between human groups (and so were the root of racial prejudice), and the idea that humans are all fundamentally African turned around the standard prejudices against the "Dark Continent" by placing the provenance of our own human race within it. The Multiregionalists recast the Out of Africa model as one which condoned mass genocide of hominid lineages as the Africans exterminated other human groups. They offered that their own model was one of peaceful anagenetic transition of the whole human lineage toward sapience, with biological species continuity mediated by intermarriage ("make love, not extermination!"). Both these points were fundamentally neither here nor there, as science stands on its own merits and not on the social implications. Over time a series of papers did come out which supported the general model of the Out of Africa Hypothesis, as other loci seemed to suggest that Africa was a special reserve of genetic diversity and that other populations were later derived subsets. The extraction of Neandertal mtDNA and the finding that it did not resemble that of modern human mtDNA seemed to give more support to the idea that replacement was total and absolute, as Stringer and Wilson contended. But there were dissenting views, and not just from a standard "skull & bones" perspective. Bloggers John Hawks and RPM have both pointed out the problem of using only mitochondrial DNA to trace phylogenies, and the early studies were heavily reliant on this locus because of its ease of recovery (the mitochondria are numerous, so in the pre-PCR age recovery of sufficient quantities was feasible). Not only is mtDNA highly subject to fluctuations in population size (remember it is haploid, passed only through the mother, so automatically eliminate half the population from the

), but there has been the recent issue that mtDNA might be subject to selection, and over the time periods that we are interested in (~100,000 years) even weak selective events are capable of obscuring and distorting demographic history. John Hawks has also offered that larger long term effective population size in Africa could result in the artifact of greater African genetic diversity if extant human demes persistently entered into genetic exchange via intermarriage, all the while locally selected alleles may result in the maintenance of regional ecotypes with deep histories. This is not to roll back time and revert to a standard vanilla Multiregional Model which posits unqualified anagenesis, the recent genetic work supplements a long line of fossil evidence which implies that Africa is special in the history of our species. Nevertheless, I think that a number of papers have emerged which suggest that some loci cannot be easily accounted for by a purely African origin. The Out of Africa Hypothesis is fundamentally one of inference scaffolded by our prior data points, and the emergence of a critical mass of loci should shift our understanding of the evolutionary dynamics. The evolutionary geneticist Alan Templeton has posited an Out of Africa Again and Again model based on his study of several genes (as opposed to focusing on just Y and mtDNA lineages, which trace the history of unbroken lines of males and females, respectively). In short, Templeton suggests that there were several partial replacements from Africa to the rest of the world, which results in many loci suggesting a recent origin from that continent, while other loci are evidence of alternative demographic histories. Genetic anthropologist Henry Harpending has promoted a similar model, using the Fisherian concept of wave of advance and hitchhiking effects to explain the distribution of alleles within our species. In short, it is getting more complicated before it gets simpler. This is why I have been posting so copiously on the idea of introgression, because I think it is essential to understanding the reality of human evolution in all its complex detail. A graphic depiction of introgression might be worth a thousand words, but its nature is a bit less transparent than the simple cladograms which can be used to illustrate Out of Africa vs. Multiregionalism. But this more complex model is fundamentally more reductionistic, tunneling down to the level of the gene, which might explain why Alan Templeton's model is favored by Richard Dawkins in The Ancestor's Tale. Why would Dawkins, a master of elegant and tight exposition of biological ideas, favor an idea which is less parsimonious than its rivals? I believe the only answer is simply that if parsimony does not suffice to capture the true nature of reality, then more parameters must be added to the model by necessity. While the strong signatures of African genetic pulses falsify a naive concept of Multiregional Anagensis, the possibility of a non-trivial smattering of pre-Out of Africa alleles within human populations, and even preponderance of these alleles on some loci, add a new twist that makes an Africa only narrative overly simple to the point of falsehood. Fundamentally, as the sample space of data begins to encompass the full range of human genomes, we will begin to comprehend the varied histories of different strands of our genetic heritage. In the Post-Genomic Era we will finally begin to get to the heart of the matter. During the early 20th century physical anthropologists constructed vibrant entertaining stories of various races and their amalgamations. The systematics of men like Earnest Hooton exhibit a naive reliance on personal intuition absolutely untouched by the yet-to-be-born Hennigian revolution in cladistics, as well as an understanding of evolution more reminiscent of the impressionistic sentiments of Ernst Haeckel than the incipient Modern Synthesis. Only with Franz Weidenreich did the thinking of the Modern Synthesis start to percolate into the discipline of physical anthropology. Over the next few decades the molecular revolution and the gene's eye view became prominent and revolutionized what had been a world of bones and stones. As we progress into the 21st century I think we have come to an impasse and need to acknowledge that our own human biases in how we categorize and conceptualize the world are now proving to be problems in modeling it with appropriate fidelity. Just as Species Concepts debates often rest on the vagaries of language, so debates about whether Out of Africa or Multiregionalism describe the history of our species ultimately go nowhere because they are framed on a higher level of organization than where the "real action" is. That is, instead of monolithic populations hurtling through time or space who either displace or give way to other demes (e.g., 100 Northeast Africans 50,000 years ago conquering the world in 20,000 years), or perpetual demes (regional hominid varieties) shaped by constant low level gene flow, the reality is that

our reticulated phylogenies have diverse histories shaped by manifold demographic and selective forces, and they will escape our attempt to straitjacket them into one basic verbal theoretical narrative

. To move beyond the tired old debates about human origins which posit two alternative models that attempt to force all the data into their constrained boxes, we need to allow the the genes to tell their distinctive stories. Phylogenetics traces the lineage of a gene, not an individual, population or species, and so we must be recalibrate our concepts to render unto nature what is hers.