The Name's Bond, James Bond... And I'm an Alcoholic

By Jo Adetunji, The Conversation 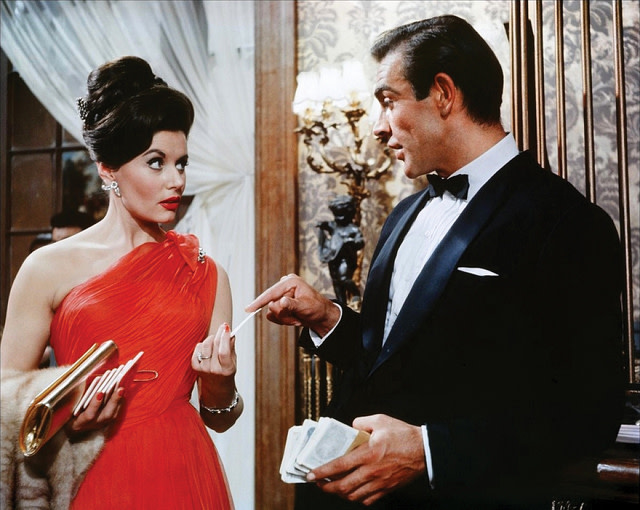 This article was originally published at The Conversation, an online publication covering the latest research.

James Bond might have been been more shaken than stirred if his intake of alcoholic drinks is anything to go by. Along with his love of women, Bond also had a keen taste for martinis. And researchers have scoured the books to calculate that the MI6 spy drank over four times the recommended limit each week. They argue that contrary to helping performance under pressure, this amount would probably have affected his capacity to perform “in all aspects of his life”. As a high-risk category three drinker, in the longer term this would put him at risk of developing alcoholic liver disease, cirrhosis, impotence and alcohol-induced tremor – not great for womanizing or sniper missions – and potentially an early death. The researchers, who published their paper

in the British Medical Journal, also discovered that Bond was often drunk at the wheel.

You Only Live Twice (Or Once)

Neil Guha, an associate professor in hepatology, and clinicians Patrick Davies and Graham Johnson, found that excluding days when Bond was unable to drink (while contemplating an early death by Goldfinger’s laser, for example), the British secret agent hit an average of 92 units a week while on missions. His maximum daily consumption was 49.8 units and during a period of around three months, he was drink-free for around only two weeks. The most Bond consumed was in You Only Live Twice, followed by On Her Majesty’s Secret Service. To work out how much Bond drank, the researchers read 12 of the 14 books about the spy written by Ian Fleming. The Spy Who Loved Me and Octopussy and the Living Daylights were excluded as the first only featured Bond as a peripheral figure and the second was a series of short stories. They noted down each time Bond drank, and when no specific drink was mentioned the researchers estimated. The drinks were then measured against pre-defined alcohol unit levels. Most 25ml shots

of top shelf spirits such as vodka and gin are counted as one unit. Beers vary but a pint of beer or larger can range between two and three units (super strength 9% lager can be as much as four). A 125ml glass of wine at about 12% strength has 1.5 units. “[We added] some research on actual poured volumes, which are more than a ‘standard’ measure,” Davies said. “Some phrases were used, for example, ‘lots of’ or ‘went to a bar’. It was difficult to quantify these so we made an estimate based around his previous habits. Only 16% of his total intake was accounted for by these terms, so any error in our estimates would be of correspondingly little effect.” Drinking guidelines in England recommend no more than 21 units of alcohol per week for men (no more than four in one day) and 14 units of alcohol per week (maximum three a day) for women. Looking at the research, you could argue that Bond fits the profile of a high-functioning alcoholic – someone considered to be alcohol dependent but is able to hold down responsibilities such as a job or a home (maybe not a relationship). But, Davies said, “I suspect that this level of function, combined with this level of drinking, is likely to be complete fiction.”

From Russian Vodka With Love

Despite the association between Bond and martinis, other calculations

made of his drinking habits have actually put Bourbon as his favorite tipple. The researchers said that although previous analyses of Bond’s drinking have counted total number of drinks, none had studies the number of units and the potential health effect. By counting units, the researchers also include the impact of double measures. In the novel Casino Royale, Bond orders a cocktail of his own invention which he calls a “vesper,” a mix of Gordon’s gin, vodka and Kina Lillet. He says in the novel:

When I’m concentrating … I never have more than one drink before dinner. But I do like that one to be large and very strong and very cold, and very well-made.

Although the authors took a tongue-in-cheek approach to the research – the setting for the study is detailed as “the study authors' homes, in a comfy chair” – they are keen to point to the serious message underlying their findings. Bond’s life in the fast lane would set him out as a risk taker. And the more you drink above the recommended limits, the greater the risk of developing serious problems, the authors said. “Persistent drinking at this level is totally at odds to his image,” said Davies. “He never suffers from hangovers. He never misses a shot. His stamina and concentration, and his clarity of thought under pressure, are always perfect. Our message is that you can either be a glamorous and fit spy and lothario, or you can drink to this level, but you cannot do both (at least, not for very long).”

James Bond’s alcohol consumption by book and year of publication. Courtesy BMJ Although Fleming once said

he had “very little in common” with his literary creation and didn’t much like him either, Fleming – who had himself been a naval intelligence officer (codename 17F) – was also a heavy drinker and smoker, with a reported 70-a-day habit

. He suffered heart problems and died of heart failure in 1964, aged just 56. Bond’s wife was killed at the end of one book and in another the secret agent said that he would probably be killed before his retirement age of 45, so having a high-stress job could well be a factor in his drinking, the authors said. “It seems completely inconsistent that someone who can function on such an incredibly high physical, mental, and indeed sexual level could drink to this amount,” Davies said. “Would you want the person who is defusing nuclear bombs to be drinking half a bottle of spirits per day?” Image by Pineapples101 via Flickr

MindWhat’s the Deal with Generation TikTok?
Recommendations From Our Store