The longer you're on Reddit, the worse your comments get. 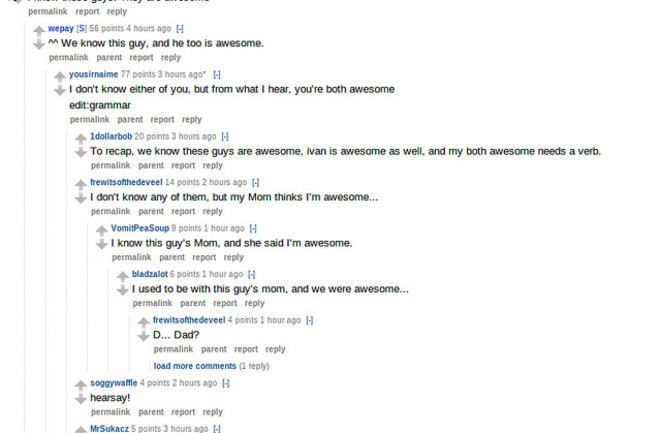 Photo: flickr/Matt GrommesHow can you turn your Reddit obsession into a legitimate pastime? Well, one way is to conduct a scientific study! These researchers analyzed more than 55 million Reddit comments, segmented by users' posting activity during a single "session." The authors conclude that when a user posts a series of comments in a short period of time, the quality of the comments begins to deteriorate - in other words, they become shorter, less complex, and receive lower ratings. The authors conclude that "future studies are needed to identify the mechanisms leading to observed deterioration, whether through the loss of attention, mental fatigue, or simply the onset of boredom." Any Reddit users out there up for the challenge of a follow-up study?Evidence of Online Performance Deterioration in User Sessions on Reddit. "This article presents evidence of performance deterioration in online user sessions quantified by studying a massive dataset containing over 55 million comments posted on Reddit in April 2015. After segmenting the sessions (i.e., periods of activity without a prolonged break) depending on their intensity (i.e., how many posts users produced during sessions), we observe a general decrease in the quality of comments produced by users over the course of sessions. We propose mixed-effects models that capture the impact of session intensity on comments, including their length, quality, and the responses they generate from the community. Our findings suggest performance deterioration: Sessions of increasing intensity are associated with the production of shorter, progressively less complex comments, which receive declining quality scores (as rated by other users), and are less and less engaging (i.e., they attract fewer responses). Our contribution evokes a connection between cognitive and attention dynamics and the usage of online social peer production platforms, specifically the effects of deterioration of user performance." Related content: Study shows that internet search engines have the power to swing elections.Flashback Friday: Google search patterns reveal human mating season.A scientific analysis of internet trolls finds that yes, they’re actually sadistic psychopaths.