The long tail of human genetics

The New England Journal of Medicine has a series of articles up on the impact of new genomic techniques on medicine, specifically in the domain of pinpointing genetic markers which are correlated with increased risk of a particular disease. David Goldstein has a skeptical take up on the future returns of genomewide association studies, while Joel Hirschhorn is more hopeful. There is another review which takes a middle path, emphasizing the relatively marginal predictive power of many of the risk alleles, but suggesting that techniques and results are bound to improve. Probably the most interesting piece in the issue is a general review with a little less opinion, Genomewide Association Studies and Human Disease. Here's the conclusion:

The jigsaw puzzle of understanding the causes of disease lies before us: we now have the edges and corners in place. The identification of monogenic disease loci and the common genetic variability that contributes to disease risk is now a tractable problem. The techniques that are necessary for genomewide identification of such rare variants that contributes to disease risk are quickly being refined. There is an enormous amount of filling in to do (including the dissection of the interactions among different genes), and there are formidable challenges, which increased bioinformatic data will help to address. Undoubtedly, there will be surprises, but the boundaries of the task ahead have already been drawn.

Ultimately all the pieces do admit that there's going to be some major investigation into rare variants, rather than the common ones which are relatively easily picked up by GWA. In any case, nice schematic: 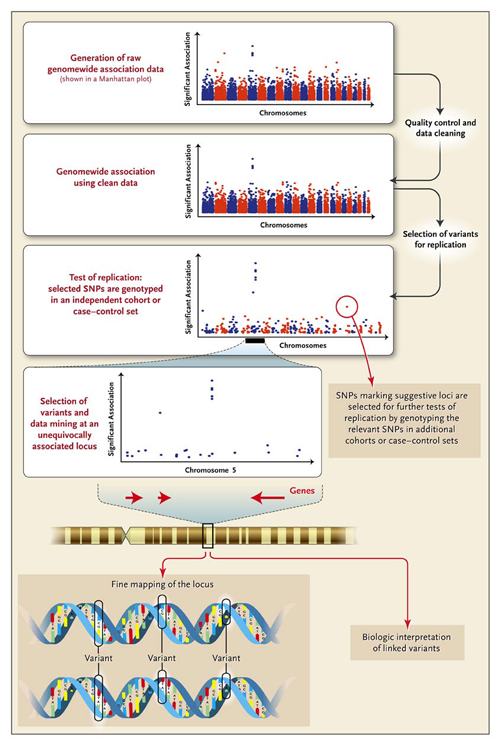