The Jiffy Lube of Genome Decoding

A new company promises to map your DNA while-U-wait—for only a few hundred bucks. 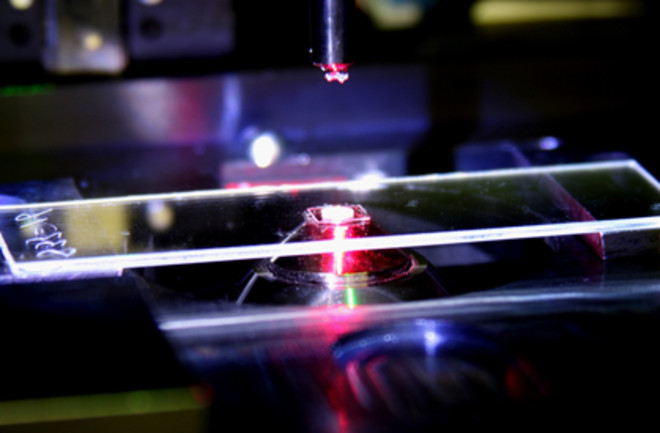 It cost nearly $3 billion and took 13 years to sequence the first human genome, and since then only a handful of people have had their total genome analyzed. Today it would price out at about $350,000 and take a few months. But Pacific Bio­sciences in Menlo Park, California, says that as early as 2013 it will have the technology to map all of a person’s DNA in just a few minutes and for mere hundreds of dollars.

Sequencing a person’s entire genome—all 3 billion base pairs of it—is far from easy. Traditional genome sequencing uses polymerase, an enzyme, to replicate strands of the DNA. Each strand then has a fluorescent-tagged base added to allow identification. These DNA samples are loaded into a sequencer to determine the order of the bases on the strands—a slow process—before a computer then rebuilds the entire genome like a jigsaw puzzle.

Pacific Biosciences says it has a better, faster way. “Like most sequencing technologies, we use a DNA polymerase, but that’s where the similarity ends,” says Stephen Turner, cofounder of Pacific Biosciences. “Other technologies use it as a reagent, whereas we harness the polymerase as a real-time sequencing engine.” By combining two steps and watching the DNA replicate in real time, identifying the bases as they are added to the strand, the company says it can read more than a thousand bases at a time.

The company’s Single-Molecule, Real-Time (SMRT) DNA sequencing technology starts by chopping DNA into pieces, then isolates each piece in an observation chamber called a zero-mode waveguide. There a polymerase molecule creates duplicates of the DNA strands. Turner’s method is able to capture the process as it occurs—he calls it “eavesdropping”—while also reading longer fragments of DNA, enabling a faster and more complete read of the original DNA sequence.

“Our DNA machine turns disease into a software problem by changing the speed and cost of data collection,” says Hugh Martin, chairman and CEO of Pacific Biosciences. As DNA sequencing becomes faster and more affordable, it should allow the building of a more complete database of genetic information. “Once we can build that sort of database for the human organism, it helps us much better understand disease, how to diagnose disease, how better to treat disease,” says Richard Wilson, the director of the Genome Sequencing Center at Washington University in St. Louis. With that information, he says, personalized medicine will become commonplace. Visits to the doctor could then produce treatments tailored not just to your lifestyle and family history, but also to your genetic profile.

That is exactly how James Watson, codiscoverer of the structure of DNA, once predicted such data would impact us: “It’s a giant resource that will change mankind, like the printing press.”