The hidden dangers of dog parks. 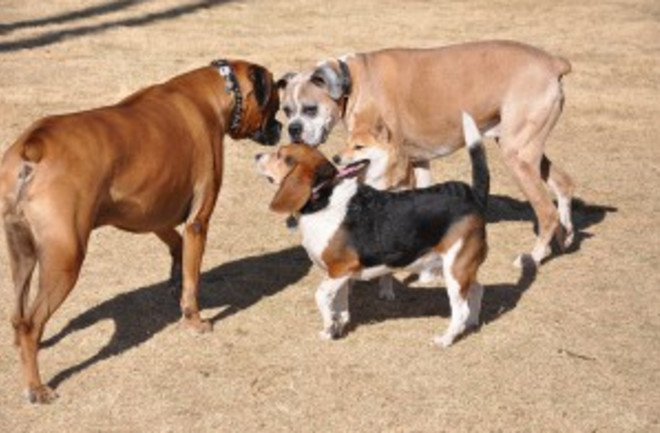 Photo: flickr/_tar0_Dog parks may seem like harmless places for dogs to mingle and smell each others' butts. But lurking in that poopy grass is a hidden menace: intestinal parasites. According to this study, dogs who visited dog parks were slightly more likely than other dogs to have Giardia or Cryptosporidium, two common animal parasites that are spread through poop. However, don't completely freak out just yet; by doing tests like the "fecal flotation" assay, the scientists determined that dogs that visit dog parks are no more likely to have unpleasant symptoms of these dreaded diseases. But for the love of dogs everywhere, if your little Fifi has diarrhea, please don't take him to the dog park to infect everyone else. Thanks. Love, Fido.Prevalence of Giardia and Cryptosporidium species in dog park attending dogs compared to non-dog park attending dogs in one region of Colorado. "Dog parks are very popular in urban areas, but there are no current studies attempting to correlate visits to dog parks and risk of colonization by enteric parasites. The purpose of this study was to determine whether dog park visitation is associated with an increased prevalence of enteric parasites or an increase in prevalence of gastrointestinal signs in dogs in northern Colorado. Feces from dogs owned by veterinary students or Veterinary Teaching Hospital staff members were submitted with a completed survey form detailing dog park attendance rates, fecal character scores, and other clinical information. Feces were examined microscopically for parasites after sugar centrifugation, for Giardia spp. cysts and Cryptosporidium spp. oocysts by a commercially available immunofluorescence assay (FA) and the FA positive samples were genotyped after PCR amplification. The Giardia assemblages were determined using the glutamate dehydrogenase (GDH) β-giardin and triose phosphate isomerase (TPI) genes and the Cryptosporidium species were determined using the heat shock protein-70 gene. A total of 129 fecal samples were assayed; 66 were from dog park attending dogs and 63 were from non-dog park-attending dogs. The overall parasite prevalence rate was 7.0% (9 of 129 samples). Dog park attending dogs were more likely to be positive for Giardia or Cryptosporidium than non-dog park-attending dogs (p=0.0279), but there was no association of gastrointestinal signs with dog park attendance or with fecal flotation or FA results. The five Giardia isolates were assemblage C and/or D and the one Cryptosporidium isolate was Ctenocephalides canis." Related content: Shut up and pet me! Dogs prefer petting to vocal praise.Yes, dogs really can feel jealous.Scientists use dog sh*t to protect crops from hungry sheep.