Population substructure in Finland and Sweden revealed by the use of spatial coordinates and a small number of unlinked autosomal SNPs:

We genotyped 34 unlinked autosomal single nucleotide polymorphisms (SNPs), originally designed for zygosity testing, from 2044 samples from Sweden and 657 samples from Finland, and 30 short tandem repeats (STRs) from 465 Finnish samples. We saw significant population structure within Finland but not between the countries or within Sweden, and isolation by distance within Finland and between the countries. In Sweden, we found a deficit of heterozygotes that we could explain by simulation studies to be due to both a small non-random genotyping error and hidden substructure caused by immigration. Geneland, a model-based Bayesian clustering algorithm, clustered the individuals into groups that corresponded to Sweden and Eastern and Western Finland when spatial coordinates were used, whereas in the absence of spatial information, only one cluster was inferred.

I've cut edited two of the most interesting figures below. 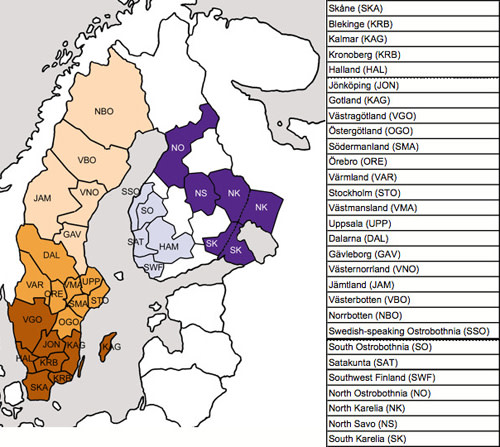 Now a figure which illustrates genetic variation clustered by the counties. I've cropped and rotated the chart, but if you click it you will see it in its original non-inverted form. 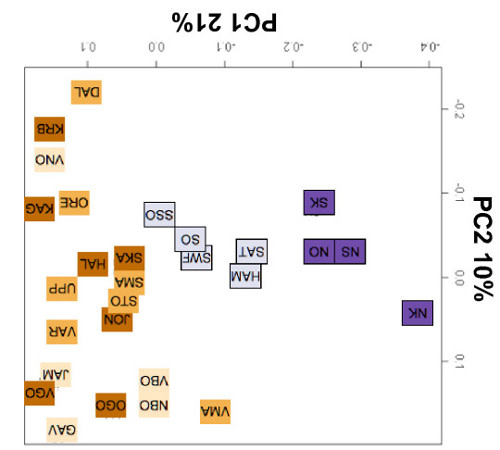 The principal component analysis clearly separated the Finnish regions and Eastern and Western counties from the Swedish as well as the Finnish regions and counties from each other...Geneland showed three clusters (Figure 3B), roughly corresponding to Sweden, Eastern Finland and Western Finland. Thus, Geneland was able to correctly identify the country of origin of the individuals despite the lower quality of the Swedish data. Interestingly, the county-level PCA...and Geneland...placed the Finnish subpopulation of Swedish-speaking Ostrobothnia closest to Sweden. This minority population originates from the 13th century, when Swedish settlers inhabited areas of coastal Finland...Our result is in congruence with earlier studies where intermediate allele frequencies between Finns and Swedes have been observed in the Swedish speaking Finns....

Are Swedish speaking citizens of Finland the descendants of Finnish speakers who acculturated to a Swedish identity? Or are they the descendants of immigrants from Sweden? These are the questions genetics allows one to explore. Related:Genetic map of Europe; genes vary as a function of distance and The Genetic Map of Europe.