The gay gene & other considerations

Jonah over at The Frontal Cortex has some commentary up on the gay sheep story. A reader pointed out that this controversy started off with some wild claims made by PETA. Nevertheless (more at Andrew Sullivan's), no matter the details of the claim, there are a few points I'd like to pick up on.... Jonah says:

So here's my hypothesis: if you select against homosexuality in a biological community, you will also be selecting against our instinct for solidarity. The same genes that give rise to gayness might also give rise to cooperation. When scientists create a population of all heterosexual sheep - this would be a boon to ranchers, since a high percentage of male sheep are gay - they will find that their sheep are now more violent as well.

Assume that Jonah is correct and that some of the loci with a range of alleles which allow for human predisposition to sociality also result in small number of obligate homosexuals.

. What Roughgarden (and Jonah) would have us believe is that there are structural-biophysical reasons why this can not happen, because if it could, it should. I can believe and accept some level of homosexual behavior emerging facultatively (e.g., bonobo females) as part of conditional behavioral strategies (some human populations have also engaged in facultative ritual homosexuality). But that does not entail obligate homosexuality as a necessity. The evolution of selfish genetic elements shows us that genomic dynamics can result in deleterious consequences for individuals, and these consequences can persist in a metastable form because of the long term ubiquity of various parasitic elements. Not only does this apply intragenomically, but there are also parasites which modify human behavior. The paradox of worker sterility in eusocial insects forced us to come to grips with inclusive fitness and Hamilton's Rule, but the mathematics doesn't pan out for obligate homosexuality in such a fashion. We have a range of somewhat baroque and peculiar choices before us to explain the biological root of this behavior, and I don't place Roughgarden's hypothesis very high on the chain of parsimony. So when Jonah says:

I say hold up brother! Let's not put the cart before the horse here. Roughgarden's thesis is speculative, to be charitable, so the inference that more obligate homosexuality leads toward more sociality is itself stretching the foundations of established biology. Fundamentally the evolutionary logic is pretty uncharted here. I suspect that the evolutionary rationale won't be adaptive at all, but some sort of selfish element, whether it be intragenomic, or extra-genomic (e.g., a parasite). I also wouldn't be surprised if medicine does get advanced enough that the proximate biological processes which underpin obligate homosexuality are nailed down (and many other psychological predispositions). As for morality, I think it is all about choice, and let's get real, in a world where white parents make sure that their kids don't go to school with blacks (no matter the test scores of the school!) you'll not be hearing many of the silent screams of any fetuses diagnosed with a high likelihood of obligate homosexuality. 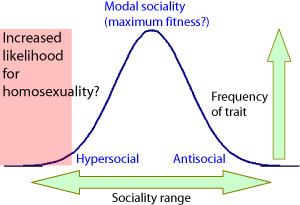 But let's take the thesis that homosexuality emerges as a byproduct for selection at numerous loci for particular traits like sociality seriously. In other words, Jonah is proposing that sexual orientation is due to a quantitative trait which results in a threshold characteristic, obligate attraction to the same sex. Various mental "illneses" might be well defined in this manner, "autism" might be the "tail" of the quantitative distribution, just as "retardation" describes all of those below an IQ of 70, even though a great number are part of the normal range of human variation (i.e., the "gifted" above 130 are also part of the normal range).^1 Now, my point about modifying alleles is that obligate homosexuality, the extreme end of the tail, reduces fitness a great deal (by definition, since obligate homosexuals among humans can not reproduce without medical technology) and it seems that even if balancing selection is generating this range it seems that soon enough other alleles would arise to suppress the fitness killing tendencies (obligate homosexuality is not evolutionarily neutral). Of course, one could say the same of autism & Asperger's in regards to its tendency toward fitness reduction, though I do not think it is nearly as extreme, and I tend toward acceptance of mixed-strategies in human behavior as the norm in regards to personality. In contrast, I do not accept the possibility of mixed sexual reproductive strategies, seeing as how we are rather constrained functionally in this regard. But as I said, let us move forward with the hypothesis that homosexuality arises from the quantitative range of the prosocial tendencies. Jonah suggests that aborting gay fetuses would be abominal insofar as it would reduce the alleles for sociality. This is truncation selection, the problem with Jonah's concern is that only a miniscule proportion of the population would be subject to selection (those who exhibit a tendency beyond the 2% threshold which drives them to obligate homosexuality). In other words, the change in allele frequencies would be rather trivial on a one generation basis, and, if one supposed that optimal fitness was in the middle of the distribution then one can infer that a metastable situation would emerge. An x number of homosexual fetuses would be aborted per generation, but the higher fitness of those with prosocial tendencies would result in the natural generation of more homosexual fetuses in generation t + 1 . Now, when you consider that the fitness of obligate homosexuals is rather low to begin with, what this is doing is reducing the life expectancy of that particular vessel of the germ line from 70 years to a few months. Selection is a very minor force (if at all) unless there is a major bias toward false positives (i.e., those with a small likelihood of being homosexual, just in case, being aborted) also being eliminated from the gene pool.^2 As I said, I'm skeptical of this adaptive narrative because quantitative traits tend to exhibit moderate fitness implications over the long term (to maintain variation it seems likely that mutation and various forms of balancing selection must be at work unless the phenotype is utterly neutral). If the fitness implication is powerful (i.e., trait x implies strong increment or decrement of fitness) then directional selection quickly homogenizes the polymorphism and the variance needed for a quantitative distribution disappears. James F. Crow has offered the hope that we could perhaps study humans like Drosophila. Alas, that isn't so, but homosexuality is an interesting biological characteristic and I wish the phobic and friendly sides would decouple their normative prescriptions from the scientific data and let it be.... 1 - A significant fraction of those with sub-70 IQs have diseases such as Down Syndrome which have wide ranging effects. But some simply have low IQs, just as some humans are rather short without being subject to dwarfism. 2 - What I'm saying here is that the abortion of homosexual fetuses wouldn't remove much of the genetic variation which results in homosexuality. The implication is that individuals who were non-homosexual, but high prosocial, would remain, and a Hobbesian future is not likely.