The extracted history of Greenland/Kalaallisut

Interesting that I just pointed to Neandertal DNA, a really big story just came out on ancient Greenlander genetics, Whole Genome of Ancient Human Is Decoded:

The genome of a man who lived on the western coast of Greenland some 4,000 years ago has been decoded, thanks to the surprisingly good preservation of DNA in a swatch of his hair so thick it was originally thought to be from a bear. This is the first time the whole genome of an ancient human has been analyzed, and it joins the list of just eight whole genomes of living people that have been decoded so far. It also sheds new light on the settlement of North America by showing there was a hitherto unsuspected migration of people across the continent, from Siberia to Greenland, some 5,500 years ago. The Greenlander belonged to a Paleo-Eskimo culture called the Saqqaq by archaeologists. Using his genome as a basis, a team of researchers from the University of Copenhagen determined that the Saqqaq man's closest living relatives were the Chukchis, people who live at the easternmost tip of Siberia. His ancestors split apart from Chukchis some 5,500 years ago, according to genetic calculations, implying that the Saqqaq people's ancestors must have traveled across the northern edges of North America until they reached Greenland.

One of the interesting aspects of this nearly total genome sequencing is that with the current state of knowledge of the loci which control skin and eye color and hair form, i.e., extremely salient phenotypic traits, you can reconstruct the general appearance of deceased individuals who are sequenced. The practical application of this in criminal forensics is obvious in its utility, but when applied to "historically sensitive" topics it will likely be more fraught. Because of the relative completeness of the genome a lot of functional information was extracted, but there's also very interesting phylogenetic information.

It looks like the that the Saqqaq culture is an instance of geographical "leapfrogging."

They skirted the northern margins of North America to settle in Greenland, with their ultimate provenance being the far eastern tip of Asia. Here's the abstract, Ancient human genome sequence of an extinct Palaeo-Eskimo:

We report here the genome sequence of an ancient human. Obtained from ~4,000-year-old permafrost-preserved hair, the genome represents a male individual from the first known culture to settle in Greenland. Sequenced to an average depth of 20×, we recover 79% of the diploid genome, an amount close to the practical limit of current sequencing technologies. We identify 353,151 high-confidence single-nucleotide polymorphisms (SNPs), of which 6.8% have not been reported previously. We estimate raw read contamination to be no higher than 0.8%. We use functional SNP assessment to assign possible phenotypic characteristics of the individual that belonged to a culture whose location has yielded only trace human remains. We compare the high-confidence SNPs to those of contemporary populations to find the populations most closely related to the individual. This provides evidence for a migration from Siberia into the New World some 5,500 years ago, independent of that giving rise to the modern Native Americans and Inuit.

Here's some of the panels from figure 3, which shows the location of various populations sequenced and compared to this individual (he's "starred" in the second two panels). 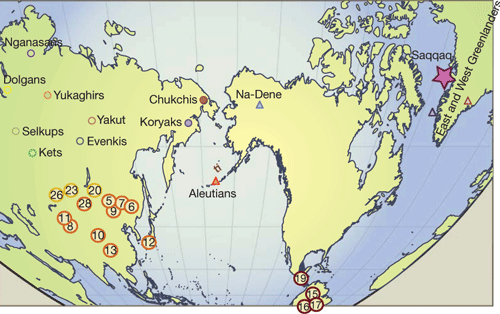 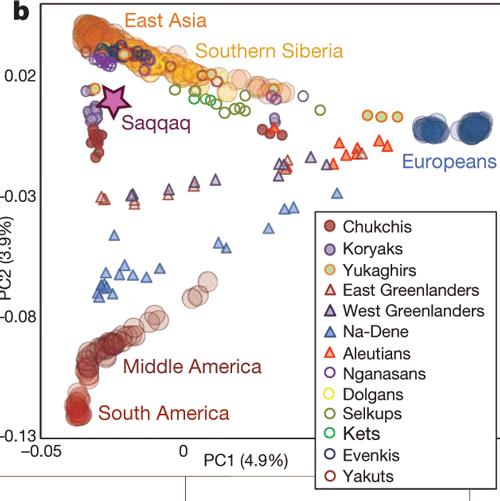 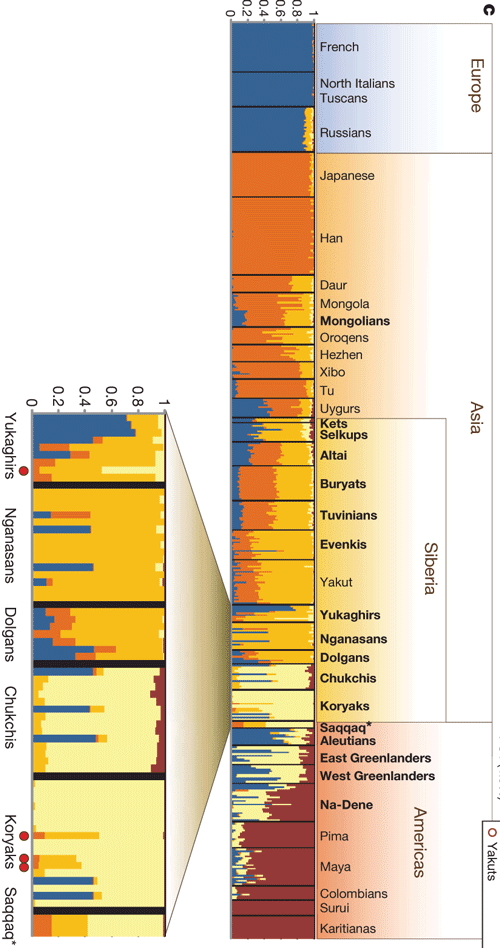 The second panel is a straightforward PC plot, showing the top two dimensions of variation within the genetic data. In the third panel you have the characterization of the genomes of individuals assuming a K number of ancestral populations generating the extant variation (e.g., three colors of equal proportion in the bar plot individual 1/3 ancestry from three populations). So for example the Uygurs are a mix of east and west Eurasian genes, which is what the history would lead us to expect. The ADMIXTURE program assumed K = 5, so 5 putative ancestral populations. These types of studies are going to revolutionize our understanding of population movements and deep history at higher latitudes. In particular I am excited by the potential they have in elucidating the more complicated network structure of the flow of genes, and by inference, cultural information. Related: Edward Yong also has a post up. Citation: Nature 463, 757-762 (11 February 2010) | doi:10.1038/nature08835