The evolution of man is no cartoon

I was semi-offline for much of last week, so I only randomly heard from someone about the "Science paper" on which Molly Przeworski is an author. Finally having a chance to read it front to back it seems rather a complement to otherpapers, addressed to both man and beast. The major "value add" seems to be the extra juice they squeezed out of the data because they looked at the full genomes, instead of just genotypes. As I occasionally note the chips are marvels of technology, but the markers which they are geared to detect are tuned to the polymorphisms of Europeans. Classic Selective Sweeps Were Rare in Recent Human Evolution:

Efforts to identify the genetic basis of human adaptations from polymorphism data have sought footprints of “classic selective sweeps” (in which a beneficial mutation arises and rapidly fixes in the population). Yet it remains unknown whether this form of natural selection was common in our evolution. We examined the evidence for classic sweeps in resequencing data from 179 human genomes. As expected under a recurrent-sweep model, we found that diversity levels decrease near exons and conserved noncoding regions. In contrast to expectation, however, the trough in diversity around human-specific amino acid substitutions is no more pronounced than around synonymous substitutions. Moreover, relative to the genome background, amino acid and putative regulatory sites are not significantly enriched in alleles that are highly differentiated between populations. These findings indicate that classic sweeps were not a dominant mode of human adaptation over the past ~250,000 years. 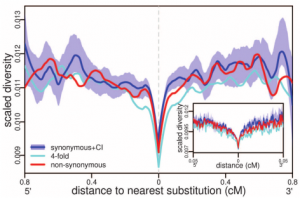 Figure 2 shows the top-line result. There are certain mutations which are "non-synonymous," in that they change the amino acid encoded by the codon. Others are "synonymous," insofar as changing the base pair has no direct functional impact. Since natural selection "sees" function the expectation is that it would impact the two types of substitutions differently. More specifically, synonymous bases should be relatively "neutral" in terms of their rate of change vis-a-vis non-synonymous bases, which may be affected by both positive and negative selective forces. A "classic sweep" is a very easy dynamic to imagine. Single mutations arise which are very favored and so are driven to "fixation," ~100%, within the population rather rapidly by positive directional selection. Since the mutation is embedded in the broader genome natural selection will also "catch" other variants associated with the mutant of interest, in direct proportion to parameters such as distance and rates of recombination. Selective sweeps then produce regions of relative homogenization as a whole block of the ancestral background genome around the favored mutant is dragged upward in frequency. The interesting point in this paper is that the authors show that there's relatively little difference in the pattern between functionally significant and non-significant regions of the genome. As the classic sweep models are predicated upon strong positive selection operating upon a favored variant, something seems off. What does this mean? Selective sweeps are a tractable dynamic. If they're not so ubiquitous then human evolutionary genetics becomes a rather more complex game, with different varieties of natural selection operative. By analogy, perhaps this is similar to the unfortunate reality that the "common disease-common variant" seems to be only marginally fruitful. Now, it does turn out that some traits do seem to have been driven by conventional sweeps. Pigmentation, infectious disease resistance, and lactase persistence. No surprise that these are traits whose genetic architectures have also been relatively well elucidated. Finally, I find this passage intriguing:

...This, to dissect the genetic basis of human adaptations and assess what fraction of the genome was affected by positive selection, we need new tests to detect other modes of selection, such as comparisons between closely related populations that have adopted to drastically different environments....

I have a candidate dyad in mind: Papuans and Australian Aborigines. They separated as distinctive populations within the past 10 to 20,000 years, and have diverged greatly in their mode of existence with the spread of horticulture in the highlands of New Guinea. Citation: