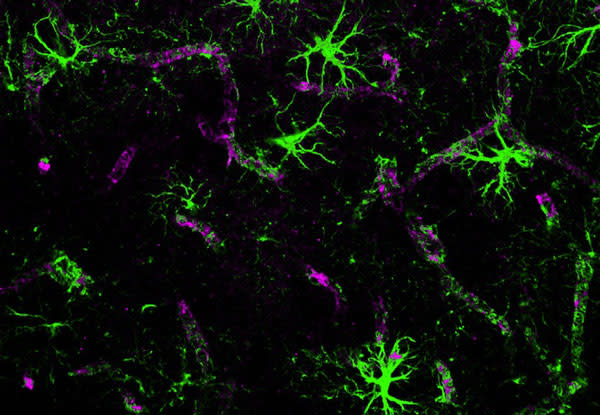 The overlap of green (glial cells) and purple (water channels embedded in the walls of those cells) show the tubes.

Your blood vessels aren't the only network of tubes winding through your body. The lymph vessels, or lymphatics, shadow blood vessels wherever they go and collect waste from around the body, as well as shuttling around immune cells and performing other functions. But the lymphatics never make it to the brain, scientists were surprised to find some years ago. Some other, mysterious method for removing waste from the brain must exist. In a new paper

in Science Translational Medicine, a team of neuroscientists reports that they've discovered a system of tubes that encircle the blood vessels that feed the brain. The walls of these tubes are made up of spindly projections from brain cells called glia, that, in the same way that trees' arching limbs form a tunnel over a road, arch around the blood vessels to form the tubes. And these tubes seem to drain the way lymphatics do, suggesting that they might be long-sought gutter of the brain. The team discovered the system when they injected a glowing tracer into the brains of mice. The tracer was designed to travel with waste-carrying fluid, and, watching through windows cut into the animals' skulls, they observed it running along, though not inside, the blood vessels. Suspecting that small ports in the surrounding glia that let water in and out of the cells might be involved in the flow, they blocked them. They saw that indeed the flow through the tubes slowed down quite a bit without them. If these channels and the tubes they feed are how the brain gets rid of waste, then they might be important in the development of Alzheimer's disease, which occurs when malformed proteins build up instead of being washed away. Indeed, the team found that those proteins, called amyloids, could move easily through the system as long as the water channels were intact. When they were blocked, evacuation of the protein ground to a halt. The scientists suggest that a defect in this drainage system might be present in Alzheimer's patients.