The age of the sword 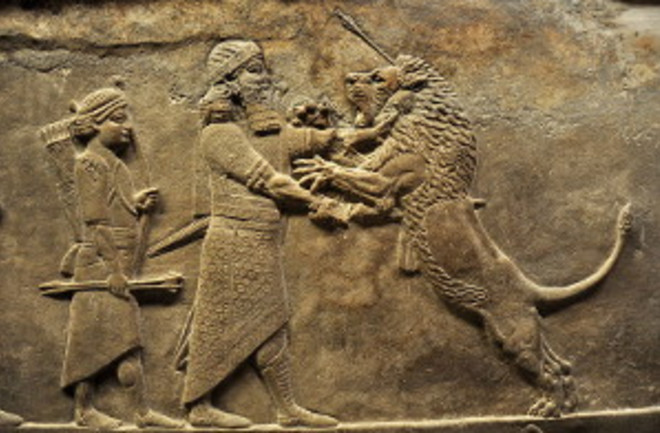 Credit: Aviok"Think not that I am come to send peace on earth: I came not to send peace, but a sword." -Matthew 10:34"There were giants in the earth in those days...when the sons of God came in unto the daughters of men, and they bare children to them, the same became mighty men which were of old, men of renown." -Genesis 6:4 Seven years ago I wrote a short post, Why patriarchy?, which attempted to present a concise explanation for the ubiquity of what we might term patriarchy in complex societies (i.e., not "small-scale societies"). Broadly speaking my conjecture is that social and political dominance of small groups of males (proportionally) over the past several thousand years is an example of "evoked culture". The higher population densities in agricultural societies produced a relative surfeit of accessible marginal surplus, which could be given over to supporting non-peasant classes who specialized in trade, religion, and war, all of which were connected. This new economic and cultural context served to trigger a reorganization the typical distribution of power relations of human societies because of the responses of the basic cognitive architecture of our species inherited from Paleolithic humans. Agon, or intra-specific competition, has always been part of the game on human socialization. The scaling up and channeling of this instinct in bands of males totally transformed human societies (another dynamic is elaboration of cooperative structures, though this often manifests as agonistic competition between coalitions of humans). To get a sense of what I mean when I say transforming, consider this section of an article in The Wall Street Journal which profiles the wife of one of the 2012 New Delhi gang rape:

Some people blame the December gang rape and similar attacks in part on a collision of traditional social expectations—commonplace in rural areas—and the modernity of India's cities, where rural migrant workers encounter the values of urbanites living by a different set of rules. During the brutal Delhi assault, for instance, the attackers accosted the woman and the young man she was with, asking why they were out together in the evening, the young man told the court. Speaking about the events of that night, Ms. Devi says she doesn't understand how a woman could be out for the evening with a man who wasn't her husband.

The normalcy of this sort of 'mate guarding' is taken for granted in many 'traditional' societies. You see it reflected in the 1995 film First Knight, where King Arthur tries Lancelot and Guinevere for treason based on a kiss (dishonor to the realm). I won't go into excessive psychoanalysis, but end by saying that the emergence of radical inequality and stratification with complex societies transformed instincts shaped in small-scale bands where petty conflicts were no doubt the norm. To my knowledge the literature from small-scale societies tends to imply a relatively more relaxed, even modern, attitude toward sexuality than one can see in world of the Eurasian Ecumene. At this point you might be curious as to the point of reviewing this conjecture. Perhaps I will bring to the fore historical and archaeological evidence which might support this model? No. Rather, I contend that the evidence of this radical reshaping of human power structures, which led to the emergence of patriarchy as we understand it, is reflected in the phlyogenetic history of our species. Two papers illustrate the differing patterns which one sees in the maternal lineage, mtDNA, and the paternal lineage, Y chromosomes. First, Y Chromosomes of 40% Chinese Are Descendants of Three Neolithic Super-grandfathers:

Demographic change of human populations is one of the central questions for delving into the past of human beings. To identify major population expansions related to male lineages, we sequenced 78 East Asian Y chromosomes at 3.9 Mbp of the non-recombining region (NRY), discovered >4,000 new SNPs, and identified many new clades. The relative divergence dates can be estimated much more precisely using molecular clock. We found that all the Paleolithic divergences were binary; however, three strong star-like Neolithic expansions at ~6 kya (thousand years ago) (assuming a constant substitution rate of 1e-9/bp/year) indicates that ~40% of modern Chinese are patrilineal descendants of only three super-grandfathers at that time. This observation suggests that the main patrilineal expansion in China occurred in the Neolithic Era and might be related to the development of agriculture.

Cambodia harbours a variety of aboriginal (and presumably ancient) populations that have largely been ignored in studies of genetic diversity. Here we investigate the matrilineal gene pool of 1,054 Cambodians from 14 geographic populations. Using mitochondrial whole-genome sequencing, we identify eight new mitochondrial DNA haplogroups, all of which are either newly defined basal haplogroups or basal sub-branches. Most of the new basal haplogroups have very old coalescence ages, ranging from ~55,000 to ~68,000 years, suggesting that present-day Cambodian aborigines still carry ancient genetic polymorphisms in their maternal lineages, and most of the common Cambodian haplogroups probably originated locally before expanding to the surrounding areas during prehistory. Moreover, we observe a relatively close relationship between Cambodians and populations from the Indian subcontinent, supporting the earliest costal route of migration of modern humans from Africa into mainland Southeast Asia by way of the Indian subcontinent some 60,000 years ago.

The scientific methods here are straightforward, or at least tried and tested. The main gains here are in terms of raw numbers and sequencing. Basically this is the extension of phylogeographic work which goes back 20 years, but on steroids. As such one should be cautious. The old phylogeography literature has turned out to be wrong on many of the details. But that's OK, there's still gold there, you just have to look. The broad scale implication of the paper on Chinese Y chromosomal diversity is obvious. Like the Genghis Khan modal haplotype these are lineages which exhibit a 'star-like phylogeny.' They explode out of a common ancestor in short order, with few mutational steps. This explosion is simply a reflection of very rapid population growth. The skewed distribution of Y lineages here (i.e., three lineages representing nearly half the population) indicates to me a pattern where elite males tend to be much more fit in reproductive terms than the average male. Rapid population growth may have been correlated with a high rate of extinction of Y lineages due to "elite turnover".

Citation: Zhang, Xiaoming, et al. "Analysis of mitochondrial genome diversity identifies new and ancient maternal lineages in Cambodian aborigines." Nature Communications 4 (2013). The second paper looks at mtDNA, the maternal line. There are some specific results which are interesting. In line with Joe Pickrell's TreeMix results it does look like Cambodians and Indians share deep ancestry dating to the Paleolithic. The PCA to the left shows the relationships of populations in relation to their haplogroups, and one clear finding is that Cambodians tend to cluster with Indians, and not Northeast Asians. This result is not unsurprising. As I've noted before on mtDNA lineages South Asians are closer to East Eurasians than they are to West Eurasians. The result for the Y chromosomes is inverted, while autosomes are somewhere in the middle. In addition the results above show that South Chinese Han mtDNA tend to occupy the same part of the plot as the Dai, who are related to the Thai people of Southeast Asia. In contrast the few North Chinese Han tend to cluster with Tibetans and Altaics. Could Sinicization have been male mediated? There's been circumstantial ethnographic evidence which points to this (e.g., some Cantonese marriage practices may reflect assimilation of Dai women). The big picture result to me is that it illustrates the discordance between migration patterns of males and females over the past 10,000 years due to the rise of agriculture and its offspring, patriarchy. I hold that there was no hunter-gatherer Genghis Khan. Such a reproductively prolific male, worthy of an elephant seal, is only feasible with the cultural and technological accoutrements of civilization. ~20,000 years ago Temujin may have had to be satisfied with being the big man in a small clan. Thanks to various ideological and military advancements by the year 1200 AD you saw the rise to power of a man who could realistically assert that he was a 'world conqueror.'

Credit: Brocken Inaglory Of course I do not believe that the world before agriculture was static. On the contrary the Chinese Y chromosomal paper reports an inferred pattern of lineage extinction which is regular and consistent. But civilization escalated the magnitude of genocide, and in particular androcide of the losers in the games of power. The relative continuity of mtDNA across vast swaths of southern Eurasia is a testament to the fact that the lineages of the 'first women' still persists down among the settled agricultural peoples, whose genomes have been reshaped by untold sequences of conquests and assimilations. While female mediated gene flow can be imagined to be constant, continuous, and localized, I believe that male mediated gene flow has a more punctuated pattern. It explodes due to cultural and social innovations, such as the horse or Islam, and long standing Y chromosomal variation which has emerged since the last wave of conquerors is wiped away in a single fell swoop. Obviously this has an effect on the total genome, and I suspect that in some cases repeated male mediated expansions have resulted in striking discordances between the autosomal and mtDNA lineages. You see this in Argentina, where Native American mtDNA seems to persist to a higher degree than autosomal ancestry because of male skew of European migration. And it looks to be the case in Cambodia, where non-North East Asian autosomal ancestry seems to be present a lower fraction than the equivalent mtDNA. With the rise of ubiquitous genomic typing and sequencing the geographical coverage will be fine grained enough the broad patterns, and specific details, will become clear. Then we will finally be able to understand if the societies fueled by grain truly ushered in the age of the domination of the many by the few. How easily does a scythe become a sword?