The academy is liberal, deal! 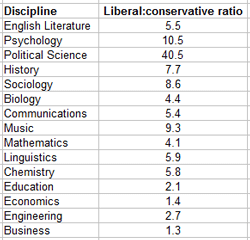 A new article in The New York Times, Social Scientist Sees Bias Within, profiles Jonathan Haidt's quest to get some political diversity within social psychology. This means my post Is the Academy liberal?, is getting some links again. The data within that post is just a quantitative take on what anyone knows: the academy is by and large a redoubt of political liberals. To the left you see the ratio of liberals to conservatives for selected disciplines. Haidt points out that in the American public the ratio is 1:2 in the other direction, so it would be 0.50. He goes on to say that: “Anywhere in the world that social psychologists see women or minorities underrepresented by a factor of two or three, our minds jump to discrimination as the explanation,” said Dr. Haidt, who called himself a longtime liberal turned centrist. “But when we find out that conservatives are underrepresented among us by a factor of more than 100, suddenly everyone finds it quite easy to generate alternate explanations.” Haidt now calls himself a "centrist," but you define yourself in part by the distribution around you. In the general public he'd probably still be a liberal, as evidenced by the logic he's using here. The proportionalist idea is so common the Left, that institutions and communities should reflect the broader society, that he's now attempting to apply the framework to ideology. But there may be many reasons not having to do with crass discrimination why different groups are differently represented in different disciplines. Consider this case: - Academics tend to be much smarter than average, and liberals may be overrepresented among the very bright. That to me could explain why education professors are more conservative, though I doubt political scientists are that much brighter than engineers! - Liberals and conservatives have different values, so that people of similar aptitudes may choose different life paths. The standard assumption is that conservatives value the remuneration of the conventional private sector more than liberals, who may opt for the prestige and status of the academy. - Studying social science may make you liberal, in that conservative ideas are just not correct. - Finally, subcultures are probably subject to positive feedback loops where small initial differences may result in disproportionate attraction of various types of individuals to different groups. After the initial positive feedback loop is generated, i.e. bright liberal undergraduates know that graduate school is socially congenial to their values, while conservatives know that it is not, group conformity effects can make the politically "out" reminder more liberal or conservative than they would otherwise be (as an inverse case is Wall Street, where may people from conventional liberal backgrounds may still identify as relatively liberal, but on many issues their environment has shifted their absolute viewpoints to a more right-wing position). Not only do I think there are reasons not having to do with straightforward discrimination as to the skewed ratios, but, I think that barring a Ministry of Conservative Representation enforcing quotas from on high it's pretty much impossible to change the basic statistics. You could, for example, simply mandate that conservatives get paid 50% more to incentivize them to becoming academics. But why stop here? How about more liberals in the military and corporate boardrooms? Does this matter? I think it does. “Positive” Results Increase Down the Hierarchy of the Sciences:

The hypothesis of a Hierarchy of the Sciences with physical sciences at the top, social sciences at the bottom, and biological sciences in-between is nearly 200 years old. This order is intuitive and reflected in many features of academic life, but whether it reflects the “hardness” of scientific research—i.e., the extent to which research questions and results are determined by data and theories as opposed to non-cognitive factors—is controversial. This study analysed 2434 papers published in all disciplines and that declared to have tested a hypothesis. It was determined how many papers reported a “positive” (full or partial) or “negative” support for the tested hypothesis. If the hierarchy hypothesis is correct, then researchers in “softer” sciences should have fewer constraints to their conscious and unconscious biases, and therefore report more positive outcomes. Results confirmed the predictions at all levels considered: discipline, domain and methodology broadly defined. Controlling for observed differences between pure and applied disciplines, and between papers testing one or several hypotheses, the odds of reporting a positive result were around 5 times higher among papers in the disciplines of Psychology and Psychiatry and Economics and Business compared to Space Science, 2.3 times higher in the domain of social sciences compared to the physical sciences, and 3.4 times higher in studies applying behavioural and social methodologies on people compared to physical and chemical studies on non-biological material. In all comparisons, biological studies had intermediate values. These results suggest that the nature of hypotheses tested and the logical and methodological rigour employed to test them vary systematically across disciplines and fields, depending on the complexity of the subject matter and possibly other factors (e.g., a field's level of historical and/or intellectual development). On the other hand, these results support the scientific status of the social sciences against claims that they are completely subjective, by showing that, when they adopt a scientific approach to discovery, they differ from the natural sciences only by a matter of degree.

The cult of p-values is such that "sexy" results often get published which are not replicated. Additionally, scientists have biases in terms of what they should find. This occurs in a non-political context in the natural sciences. In Jonah Lehrer's widely circulated piece on the "decline effect" there were plenty of examples from biology. I assume that the assumed political liberalism in social science labs across the country has a strong effect on what gets studied, how it gets studied, and what gets submitted. Consider the work on gay parenting. This is an aspect of the "Culture War" where conservatives are slowly and inexorably losing, with gay marriage assumed to be inevitable within the decade. Much of the recent work shows that there is no difference in outcomes of children from gay parents, or that these children even fare better. Now, imagine if a pro-gay rights researcher find a marginally statistically significant effect of having gay parents being correlated with adult psychopathology. Social science being what it is the researcher could plausibly argue to themselves that this isn't a robust result which would be validated by replication, especially in light of the previous research in this area. Additionally, what if you add in the possibility that there is a gay marriage ballot measure in the state where this researcher lives, and where their research university is prominent? Should they present their findings at conference and so allow it to get reported at such a critical juncture? I'm giving you a pretty stark and bald example, but I think more subtle forms of bias are just part of the bubbling epiphenomenon of science. Especially in light of the psychological discipline's tacking with the cultural winds when it comes to homosexuality I don't think that it is likley that there isn't a level of political cheerleading going on here. I actually accept the behavior genetic finding that parents matter a lot less than we assume, so as a matter of fact I assume that having gay or straight parents doesn't have a large effect. But, I don't believe that researchers in this area, which is at the heart of the culture wars, are dispassionate. And, I think that effects their outcomes somewhat in the aggregate. Where does this leave us? Buyer beware! I've identified myself as conservative several times on this weblog. I'm pretty skeptical of the findings of social science in a lot of cases because I assume there's bias which creeps in because there's so much unanimity of thought in labs. I've heard plenty of stories on the ideological pressures which are get reinforced as a matter of course. Not only that, but many social sciences have normative biases baked into the cake of their disciplines. Economics is one where many on the far Left complain that "orthodox" "positive" economics is actually ideology pretending to be science. As a conservative, and not a libertarian, I think they have a point. In particular, the materialistic methodological individualism of modern economic models of utility do miss something I believe when it comes to Eudaimonia. But as a conservative, I believe in muddling on. I'm skeptical of social engineering generally, and I'm skeptical of social engineering in this case. Just how the die rolls. Addendum: One thing about ideas is that quality, not quantity, matters. So I don't think you need proportionate number of conservatives or liberals in a discipline of culture to make ideas heard. The Federalist Society for example has changed the legal world, despite the likelihood that most elite lawyers remain conventional liberals.

Planet EarthShould the Turkey Replace the Bald Eagle as the National Bird? Ben Franklin Thought So
Recommendations From Our Store