The 2013 BMJ holiday issue is a gift of silly science: from James Bond to the Brady Bunch.

The Brady Bunch? New evidence for nominative determinism in patients’ health: retrospective, population based cohort study "Objective: To ascertain whether a name can influence a person’s health, by assessing whether people with the surname “Brady” have an increased prevalence of bradycardia. Design: Retrospective, population based cohort study. Setting: One university teaching hospital in Dublin, Ireland. Participants: People with the surname “Brady” in Dublin, determined through use of an online telephone directory. Main outcome measure: Prevalence of participants who had pacemakers inserted for bradycardia between 1 January 2007 and 28 February 2013. Results: 579 (0.36%) of 161 967 people who were listed on the Dublin telephone listings had the surname “Brady.” The proportion of pacemaker recipients was significantly higher among Bradys (n=8, 1.38%) than among non-Bradys (n=991, 0.61%; P=0.03). The unadjusted odds ratio (95% confidence interval) for pacemaker implantation among individuals with the surname Brady compared with individuals with other surnames was 2.27 (1.13 to 4.57). Conclusions: Patients named Brady are at increased risk of needing pacemaker implantation compared with the general population. This finding shows a potential role for nominative determinism in health." Bonus excerpt from the full text: 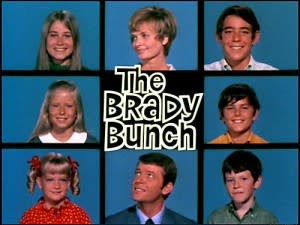 If you're a fan of joke scientific articles like we are, then you're most certainly aware of the British Medical Journal (BMJ) Christmas issue. Every year in December, BMJ publishes tongue-in-cheek articles with topics ranging from disappearing teaspoons to diagnosing Jar-Jar Binks. And this year is no exception. You might have already seen the article suggesting that James Bond was an alcoholic ("Were James Bond’s drinks shaken because of alcohol induced tremor?"). Other gems include "The survival time of chocolates on hospital wards: covert observational study"; "Laughter and MIRTH (Methodical Investigation of Risibility, Therapeutic and Harmful): narrative synthesis" (reviewing the beneficial and harmful effects of laughter); and "Morphology and size of stem cells from mouse and whale: observational study" (spoiler alert: they're the same size). But we're partial to the article below, which asked whether people with the last name "Brady" are more likely to suffer from bradycardia (an abnormally slow heartbeat that sometimes requires a pacemaker). Be sure to check out the table after the jump to even more examples of "nominative determinism" in scientific publications. 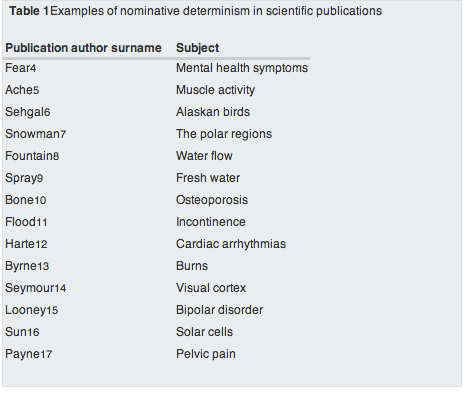 "Weedon and Splatt’s paper on the urethra syndrome in the British Journal of Urology is often cited not only for its obvious scientific merit, but also as a great example of nominative determinism. The term nominative determinism describes how certain people seem compelled towards a particular profession because of the influence of their surname. It was first coined by New Scientist journalist John Hoyland in 1994. This is not to suggest that the theory is a recent one. Over 40 years before Hoyland, in 1952, Swiss analytical psychologist Carl Jung had noted “the sometimes quite gross coincidence between a man’s name and his peculiarities or profession.” We rarely need to search for too long for great examples—Marie Harte was a cardiologist in Dublin for many years—but the growth of the internet has increased the ease with which we can now find cases of nominative determinism (table 1). A newspaper article on the subject identified a dermatologist called Rash, a rheumatologist named Knee, and a psychiatrist named Couch, through use of the American Directory of Physicians. Obviously, science does not have a monopoly on nominative determinism. Was it a surprise that during the London 2012 Olympics, a man who shares his name with lightning became the fastest man in the world? Usain Bolt ran the 100 metre final in 9.63 seconds, faster than anyone else in history. It is also somewhat predictable that Bulgarian hurdler Vania Stambolova would, well, stumble over as she did, unfortunately falling at the first hurdle in her heat. On a more sombre note, Will Drop was a Montreal window cleaner who died in a fall, and on the same day in October 1941, two inmates of the Florida state prison, Willburn and Frizzel, were sent to the electric chair." Related content: NCBI ROFL: Sword swallowing and its side effects.NCBI ROFL: A new scientific source of bias: SILLY bias. Analysis of citations of BMJ's Christmas articles.NCBI ROFL: Parachute use to prevent death and major trauma related to gravitational challenge.