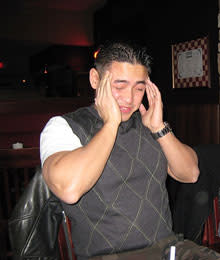 So sweet... so painful. You try to hold back, to stop yourself from over-indulging, because you know what will happen: That crippling, brain-piercing pain of the ever-feared brain freeze will ruin your ice cream love-fest.

First, let’s get one thing straight. “This condition is referred to as an ‘ice-cream headache,’ ” says Stacey Gray, a sinus surgeon at the Massachusetts Eye and Ear Infirmary in Boston. “It’s a very technical term.”

Gray also noted that, even though no studies have been done on the exact cause of ice cream headache, she believes we can safely rule out the theory that imbibing overly cold edibles actually lowers brain temperature or causes brain damage. The pain that comes from slurping that Slurpee doesn't have anything to do with the brain, she says.

Though the NIH has put no money towards studying what causes this condition, scientists and doctors have two ideas as to what might cause the pain, which feels something like an icicle piercing your temple. The first idea is that the cold from a drink causes the blood vessels in the sinuses to shrink, which blocks blood flow in a way similar to a migraine. The second theory suggests that the pain is caused by the low temperature aggravating part of the trigeminal nerve in your mouth.

And even if making mouth-love to an ice cream cone did lower your brain temperature by a few degrees, neurosurgeon Rafael Tamargo at Johns Hopkins Hospital’s told Popular Science that it's no big deal. He often gives patients' brains the polar bear plunge down to 64 degrees Fahrenheit during brain surgery:

“Even if the patient wasn’t anesthetized, at that temperature they would be in a noninteractive state, unable to sense stimuli or produce a response,” Tamargo says. “But once you warm the brain up, it picks right up from where it left off. It’s not harmful at all.”

Related content: Science Not Fiction: Eleventh Hour: They Only Freeze the Heads! Discover Magazine: The Art & Science of Slicing up a Human Brain Discoblog: NCBI ROFL: I scream! You scream! We all scream…from ice-cream headaches. Discoblog: Why Can’t All Medications Come in Ice Cream-Form?