Tasmanian Tigers are back! 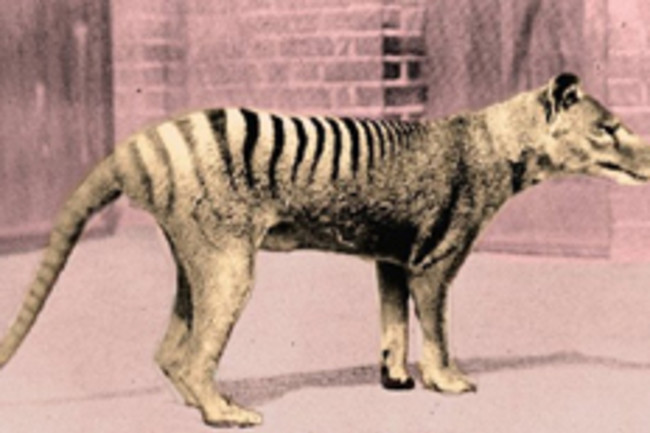 OK, the title is deceptive; but the reality is kind of cool in my opinion (you may not share my normative filter; somepeople prefer the dead). PLOS One is publishing a paper which takes Tasmanian Tiger genetic material, and re-expresses it in vivo in mice! The reasoning for this is pretty straightforward; there are phylogenetic questions which extant lineages can't always answer. With the emergence of the whole field of ancient DNA extraction and sequencing an entirely new avenue of scientific analysis is opening up. This paper cites the work from last year on

; if we're getting genetic material from remains that are more than 40,000 years in the past, what are the possibilities when it comes to populations of organisms which went extinct more recently? Unfortunately geography is a variable here; the preservation of genetic material is more problematic in moist tropic locales. But I am wondering if researchers could at some point extract enough genetic material from Tasmanian Tiger samples so to generate a rather good replication in terms of physique? I assume there's already a lot of sequence identity between Tigers and Devils, so perhaps the latter could be the templates? This sort of thing was proposed with dinosaurs and birds. The assumption was that you could just tweak the genes of the latter to produce something resembling the former since they're not that distantly related, birds are just a branch of the theropods. It seems to me that a Devil → Tiger transformation is lower fruit on the tree.... Of course you might wonder why anyone would want to do something like this. Like I said, we all have our normative filters. I know rationally that these sorts of reconstructions are going to be imperfect, but emotionally that doesn't matter. We don't appreciate animals because of the discrete information packets which they express, rather, the whole bundle of behavioral and physical characeristics makes a qualitative impression on us. Since I'm not one of those repulsed by the idea of fish genes spliced into tomatos, attempts to resurrect extinct lineages through splicing in as much genetic material as we can recover into closely related extant taxa is not something I'm going to be disturbed by. It's playing God, but driving whole species toward extinction was already playing God, we might as well step up to the plate and take on the role of Vishnu as well as Shiva. Pask AJ, Behringer RR, Renfree MB (2008) Resurrection of DNA Function In Vivo from an Extinct Genome. PLoS ONE 3(5): e2240. doi:10.1371/journal.pone.0002240 The abstract:

There is a burgeoning repository of information available from ancient DNA that can be used to understand how genomes have evolved and to determine the genetic features that defined a particular species. To assess the functional consequences of changes to a genome, a variety of methods are needed to examine extinct DNA function. We isolated a transcriptional enhancer element from the genome of an extinct marsupial, the Tasmanian tiger (Thylacinus cynocephalus or thylacine), obtained from 100 year-old ethanol-fixed tissues from museum collections. We then examined the function of the enhancer in vivo. Using a transgenic approach, it was possible to resurrect DNA function in transgenic mice. The results demonstrate that the thylacine Col2A1 enhancer directed chondrocyte-specific expression in this extinct mammalian species in the same way as its orthologue does in mice. While other studies have examined extinct coding DNA function in vitro, this is the first example of the restoration of extinct non-coding DNA and examination of its function in vivo. Our method using transgenesis can be used to explore the function of regulatory and protein-coding sequences obtained from any extinct species in an in vivo model system, providing important insights into gene evolution and diversity.