Taming Parkinson's With Electric Pulses Through the Spine 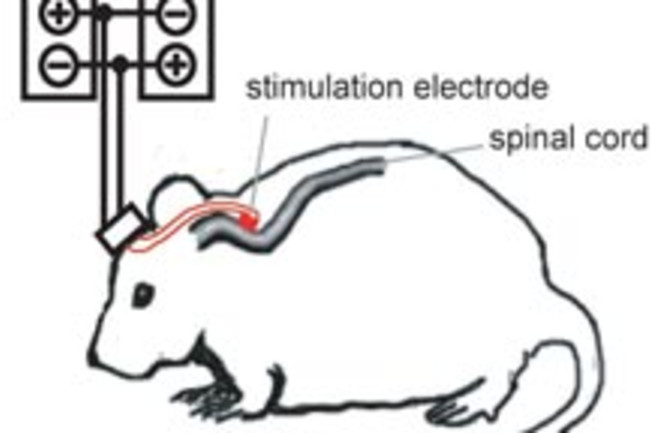 Parkinson's patients could one day find relief from their symptoms by wearing a device on the backs of their necks that sends steady pulses of electricity up their spinal cords and into their brains, according to a new study. Researchers tested the technology on lab rats and mice that were nearly immobilized with Parkinson's-like symptoms, and saw an immediate and dramatic effect.

As long as a mild current flows up their spines and into their brains, the animals regain the ability to scamper around their cages, as if they were normal.... [Lead researcher Miguel] Nicolelis added that the procedure was now being tested on monkeys, and “if it succeeds, human clinical trials could begin in the next few years” [The New York Times].

Some Parkinson's patients have already found relief from their symptoms with deep brain stimulation, in which tiny electrodes are surgically implanted in their brains to make a "brain pacemaker," but this new experiment was the first to try a less invasive form of neural stimulation.

If the findings are confirmed in humans, scientists say, the procedure could dramatically improve treatment for the disease by making electrical therapies safer and more broadly available [Technology Review].

Parkinson's progressively kills brain cells that produce dopamine, a message-carrying chemical associated with movement. Dopamine replacement drugs can delay symptoms for a while but there is no good treatment and no cure.... In healthy people, neurons fire at different rates as information is sent between the brain and the body to initiate motion. Nicolelis said the problem in Parkinson's disease is that neurons become scrambled and begin firing all at once [Reuters].

Deep brain stimulation is believed to work by interrupting that synchronized firing and restoring normal neural rhythms. In the new study, published in Science, researchers found that tiny, paper-thin electrodes that are implanted in the spine and touch the outside of the spinal cord have a similar effect. A video of an experiment shows that when the current is switched on, the rat immediately begins to move freely around its cage. Spinal cord stimulation has previously been used to treat such medical conditions as chronic pain, spasticity, and strokes. But although the technology has been well tested on humans, its benefits for Parkinson's remain to be seen.

An expert on stimulation theories who was not involved in the research, Dr. Rodolfo Llinás, said the treatment “makes good sense,” but he added: “How successfully it will translate to humans is an important issue. The human spinal cord is much more complex than the rodent counterpart, and long-term stimulation might result in nasty secondary effects” [The New York Times].