Take a Colorful Peek Inside a Fruit Fly's Brain 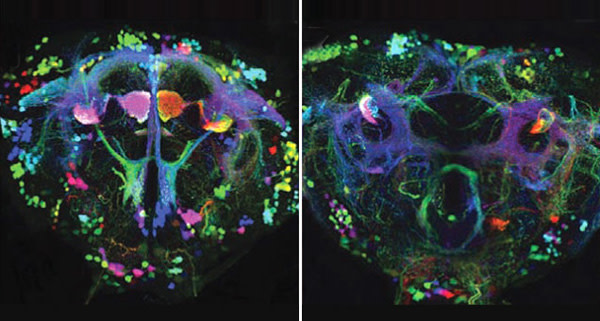 Scientists are devising cleverer and cleverer means to see inside the brain—and creating some amazing pictures along the way. These psychedelic images come from one of two studies in the journal Nature Methods, which present similar but slightly different ways to color the connections between neurons in a fruit fly. The projects build upon similar research from 2007 that achieved this "brainbow" effect in mice, and they could allow for new ways to track the formation and purpose of brain cells.

The researchers gave the insects genes for a red, a green, and a blue fluorescent protein. The genetic control system they devised spurs each cell to make a different amount of each of the three proteins. Like the red, blue, and green pixels on a TV screen, the combination of the three proteins causes each cell to glow a unique color. [ScienceNOW]

The inserted genes come from naturally glowing jellyfish. They allow not just individual cells to be seen, but also connections:

Each gene produces a different fluorescent colour, lighting up individual neurons, or even all of the cells descended from an embryonic neuron - because they will carry the same gene and therefore be the same colour. Both techniques result in colourful visualizations that allow all the nerve cells in any one lineage to be distinguished and their development traced, illuminating how neural circuits develop and interact. [Nature]

The key to these pretty brain

images is a little bit of randomness. The injected material contains coding for a number of different colors, but only one is expressed: The one nearest a DNA region called the "promoter."

As the [genetic] strings are identical, all the modified neurons would be the same colour, and would be impossible to separate visually. But the researchers altered the gene strings using enzymes, so that a different colour-producing gene sat next to the promoter in different cells, and individual neurons could then be identified. [Nature]

The two research teams realized upon meeting at a conference that they were working on strikingly similar projects, and in the spirit of collaboration, decided to submit their papers for publication together. The differences between the two methods—called "dBrainbow

"—are subtle; they lie in the enzymes each uses to alter the strings and thereby create different colors. Related Content: DISCOVER: Far Out: The Most Psychedelic Images in Science

(photo gallery) DISCOVER: The Brain Is Ready for Its Close-Up

(photo gallery) 80beats: Scientists Peer Into the Brain of a Fruit Fly in Mid-Flight

80beats: Researchers Flip Brain Cells On And Off With Light Pulses