Swiss Dairy Cows Send Texts When They Are In Heat 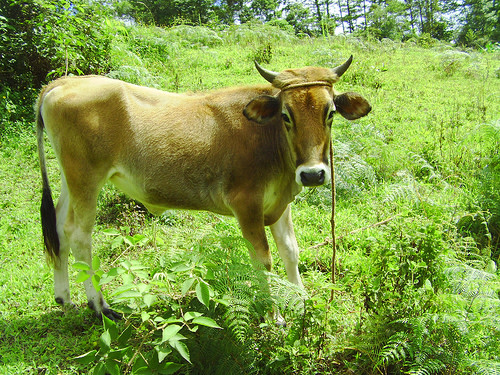 It's giving a whole new meaning to sexting: Swiss farmers are testing out a new system in which sensors attached to cows send farmers a text message when the animals are ready to mate. Farmers need to know this intimate information because when heifers become fertile, once every 18 to 24 days

, farmers will bring in a bull or, more likely, artificially inseminate them. Missing a chance at artificial insemination means letting expensive bull semen go to waste. There are a few signs farmers can watch for, according to

When a cow is in heat, she's likely to have mud on her rump and sides, courtesy of the cows that have been riding her. For the same reason, the hair on her tail-head can be rough and matted (this will be most noticeable after heat--too late to be effective). Often you will have bull calves in the herd attempting to mount her as well." But developers of the texting system told

the New York Times that it's becoming harder and harder to pick up on the signs. Here's how the system works: Since a cow in heat gets hot and restless, each cow is implanted with two sensors: a thermometer in the genital area, and a motion sensor on the neck. When the sensors register that both qualifications are met (the cow is both hot AND bothered), they send the farmer a message. Is this the future of dairy cows' love lives? Well, if the price is right, farmers told the Times. It's an expensive device, but if it helps farmers keep their herds going, it could be worth it. Texting livestock seems to be a bit of a fad in Switzerland: a couple months ago we reported

on a similar system that let farmers know when collared sheep are attacked. The hills may soon be alive with the sound of ringing ruminants.