To transport goods within the body, scientists turn to a familiar design. 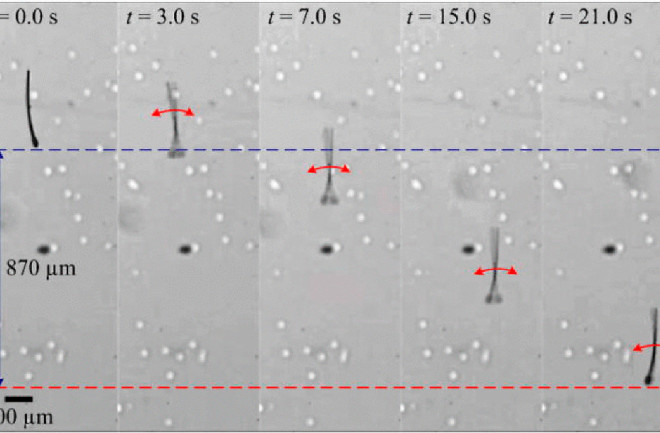 Magnetosperm — six times longer but roughly the same shape as their natural brethren — might be the drug delivery bots of tomorrow. Weak magnetic fields cause the device to waggle its body, pushing it forward by 870 micrometers (just under a millimeter) in 21 seconds. | I.S.M. Khalil/GUC and S. Misra/U.Twente

If you could shrink yourself down to the size of a bacterium and explore a watery pool, your normal swimming technique would soon prove worthless. Liquids feel thicker, more like moving through honey than water, and tiny swimmers are easily jostled off course. So when an international team of engineers wanted to design tiny robots that could move cells around, deliver drugs deep inside the body or clean clogged arteries, they looked to nature for inspiration: sperm.

The team’s “magnetosperm” are small, about the size of a dust mite, but six times longer than a human sperm cell. Their design mimics the familiar swimmer’s physique, with a thin magnetic disk added to the head. To get the sperm to swim in liquid, the researchers switch on an oscillating magnetic field — an effect roughly equivalent to making jazz hands while holding a bar magnet. The changing field direction makes the sperm’s body wiggle, propelling the sperm-bot forward. The magnetosperm need only weak magnetic fields to swim, so the robots should still work well in deep tissue, farther from the source of the oscillations.

The next steps are to make the magnetosperm even smaller and to test them in environments that more closely mimic the human body, the researchers say.